verb (used with object)
1. to watch (multiple videos, episodes of a TV show, etc.) in one sitting or over a short period of time:
“We binge-watched two seasons of the show in two days.”

verb (used without object)
2. to engage in this activity.

My 16-going-on-17-year-old son, Aaron, and I have been engaging in the activity of binge-watching this TV show:

… and we finished watching Season 2 of the American version of House of Cards last night.

Here’s one result of binge watching a series about compelling, manipulative, and smart schemers:

When I’m doing or saying something for my own self-interest, it’s difficult NOT to feel evil.

Aaron and I agree about that side effect of binge-watching House of Cards.

My boyfriend Michael — who has seen the original, UK version of House of Cards — plans to bingewatch the American House of Cards when Aaron and I are away, binge-watching all things California, next month.

Other things I’ve been binge watching lately include … 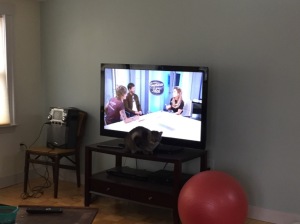 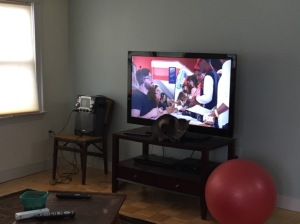 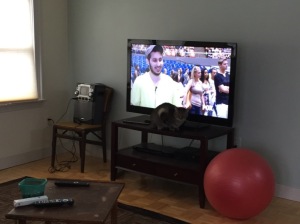 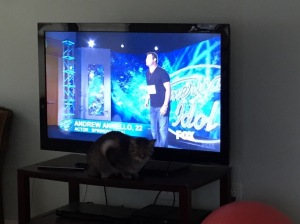 … the current season of American Idol (thanks to the recommendation of binge-watched and binge-watching blogger, Mark Bialczak) and …

As you may have noticed, Oscar the cat likes to binge-watch me (among other things): 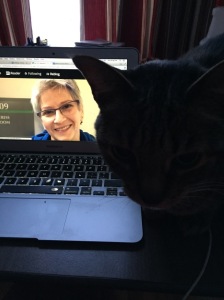 This week, I shall be binge-watching — and also be binge-watched by — doctors, nurses, and other health professionals a) where I work and b) at two other Boston-area hospitals, for lots more cardiac tests.

What do you think would be a good binge-listening accompaniment for this binge-watching post?

I’ve already used the theme music  from House of Cards in this here recent post, so how about this?

(Live version of “Watching the Detectives” by Elvis Costello available for binge-watching here on YouTube.)

Many thanks to dictionary.com, Aaron, Kevin Spacey, Robin Wright, all the other talented people responsible for the fabulous binge-watching experience that is House of Cards,, Michael, binge-watching cat Oscar, my friend Carol (appearing in yesterday’s post and with Oscar, above), Mark Bialczak, American Idol, Elvis Costello, and YOU, for binge-watching or otherwise watching this blog.