That’s a quote I just read on a friend’s Facebook page:

And, immediately, because I’m in Boston, I knew what that meant.

Today, Boston will honor their baseball team, the Red Sox, for winning the World Series, with a parade, all around town.

Here’s the parade route (thanks to boston.com): 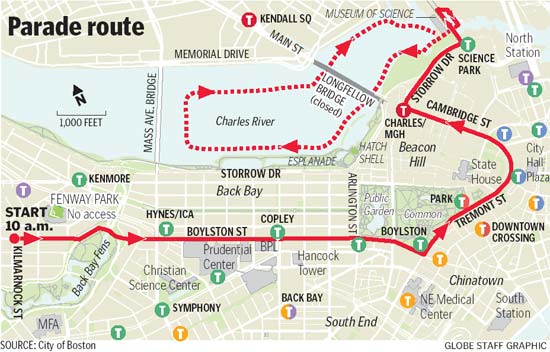 The parade stretches over two of my favorite types of places: land AND water.

Here’s a view, from an earlier post, of part of that parade route (photo taken from the Longfellow Bridge): 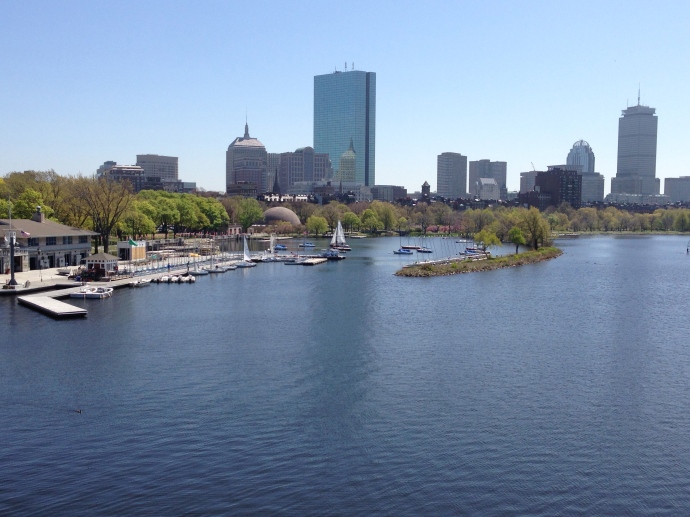 Here are some quotes about today’s parade, from bostonglobe.com:

The path down Boylston Street will provide a poignant backdrop to the parade and pay tribute to a team whose stunning success came to symbolize the city’s resilience and resolve in the aftermath of the April 15 Boston Marathon bombings, which killed three people and wounded more than 260.

Outside Sólás, an Irish pub near the finish line, Peter Fiscina, 66, who lost friends in the 9/11 attack on the World Trade Center towers, said Thursday evening that he feels that the parade will help the city heal.

Across the street at Marathon Sports, where mannequins sported Boston Strong shirts in the display window, assistant manager Dana Jamieson said it felt strange to be celebrating in the same area that was a scene of devastation in April, but the parade will “help put a sense of community back for the residents of Boston.”

Michael Parillo, who also works at Marathon Sports, welcomed the celebration and said that in many ways, the team’s victory has made the slogan “Boston Strong” as much about triumph as tragedy.

“It’s becoming more of an icon for the whole city, not just what happened that day,” he said earlier in the day.

After the bombings, in April, I returned to Boylston, for my own healing walk down that familiar street. (Here‘s my post about that.)

I wasn’t sure, when I woke up today, whether I was going to go to the parade.

Writing down that short list, above, however, reminds me of this:

I’ve gone, alone, into similar situations before and …. LOVED them!

It’s time for a song!

I’m Off to See the Red Sox

I’m off to see the Red Sox

Those wonderful Red Sox of ours,

You’ll find they are a whiz of a team

If ever a team there was,

If ever, oh ever, a team there was,

Those Red Sox of ours are one, because

Because of the wonderful things it does!**

I’m off to see the Red Sox,

Those wonderful Red Sox of ours.

Thanks to the Boston Globe,  Harold Arlen and Herbert Stothart***, all the Boston teams (sport-related and otherwise),  paraders everywhere, and to you — of course! — for reading today.

** Did I follow the rules of grammar here?  What do YOU think?

*** The lyricist and composer for “The Wizard of Oz.”