Posts Tagged With: fear of flying

Yesterday, both of my therapy groups wanted to discuss people and situations that drive them nuts. 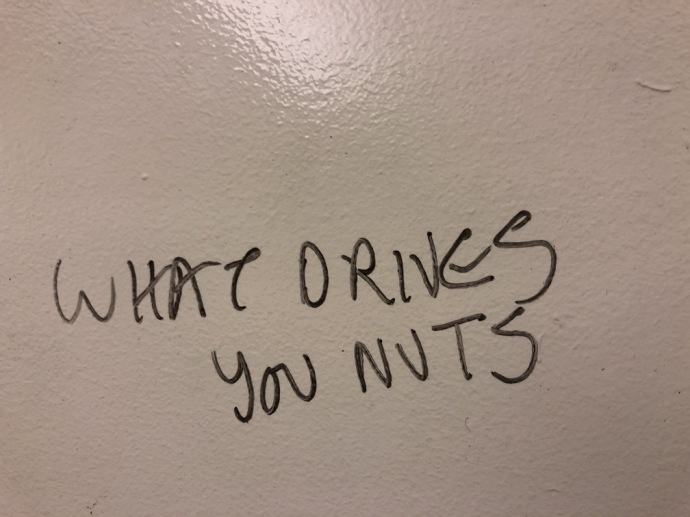 If idioms you don’t understand drive you nuts, here’s an explanation of “driving me nuts” from knowyourphrase.com :

To be greatly frustrated or annoyed. The word “nuts” is sometimes replaced by the words crazy, bonkers, bananas, insane, or up the wall. However, the meaning remains unchanged.

When people are annoyed to the point where they can no longer tolerate anymore, they might use this common idiom to describe their frustrations.

According to the website Word-Detective, by the mid to late-1800s, the word ‘nut’ was slang to mean a person’s head. Not long after, it looks like it also acquired the meaning of someone who was not acting right in the head, e.g., a person acting strange or crazy might be described as “nuts” or being “off their nut.”

The earliest example I could find of this phrase in writing comes from the newspaper The Bilioxi Daily Herald, printed in the year 1884. The idiom is written under an advice column, where people could write in asking a woman named Ann Landers for advice:

“DEAR ANN LANDERS: I am a boy, 18 years old, a high school senior, and my dad is driving me nuts! He has read a lot about drugs and is scared to death I might be trying something.”

* My neighbor is blaring loud music and it’s really driving me nuts. Maybe I should go tell them to stop.

* Emily is driving herself nuts over the job interview she has tomorrow, and she’s having trouble sleeping from the anxiety.

Ann is driving herself nuts over (1) the plane trip she is taking tomorrow and (2) how painful her shoulder is, and she’s having trouble sleeping from the anxiety.

When people in my groups kept  focusing on what drives them nuts  (which included rude people and politicians), I eventually drove the discussion towards coping strategies. I asked people to focus on what helps when things drive them nuts, and they were able to identify many things , including:

It’s driving me nuts that I can’t remember any more of the many coping strategies people discussed yesterday.

Do any of these photos drive you nuts? 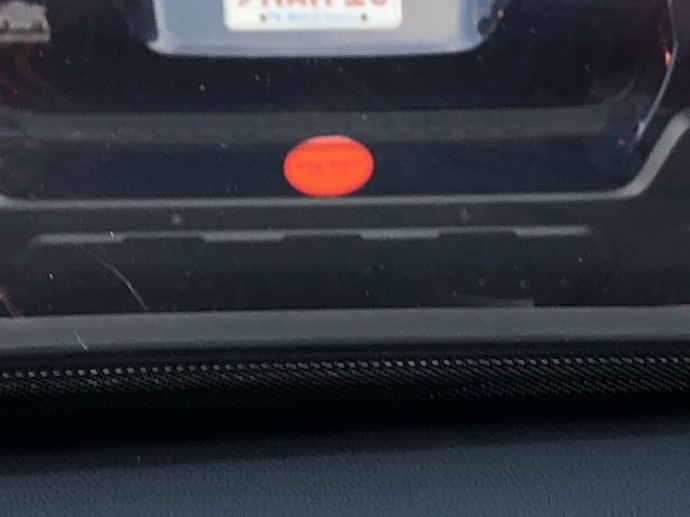 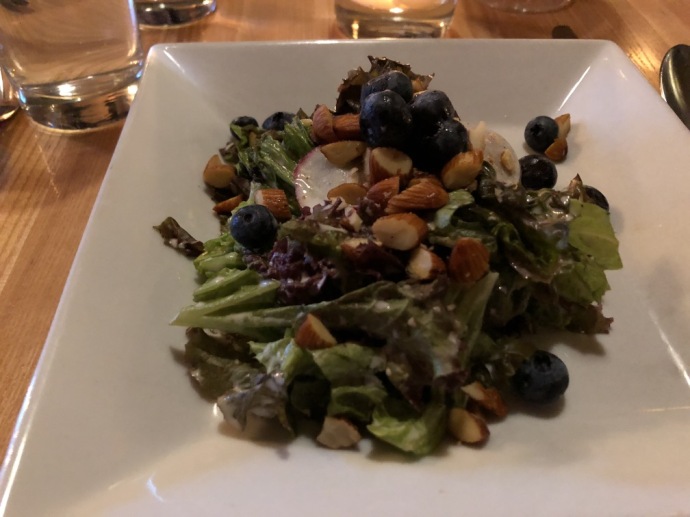 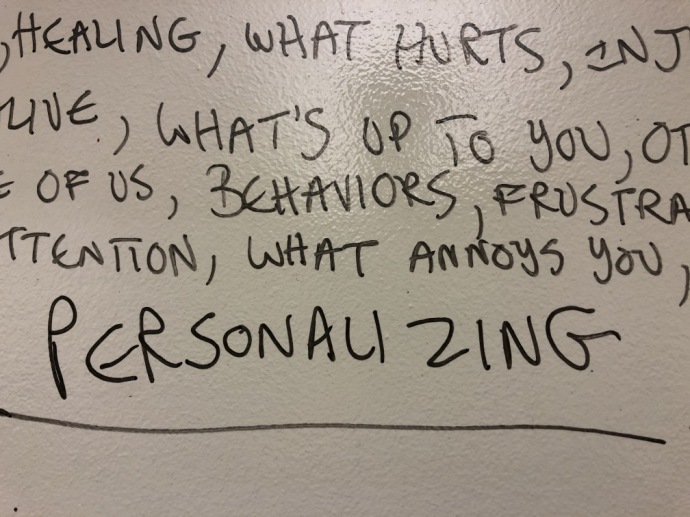 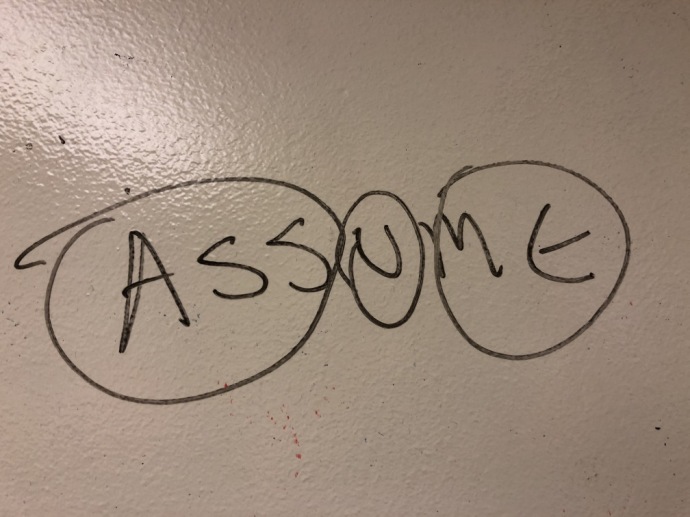 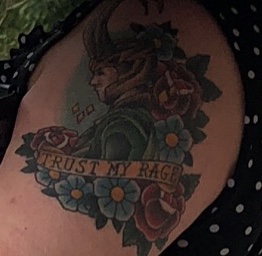 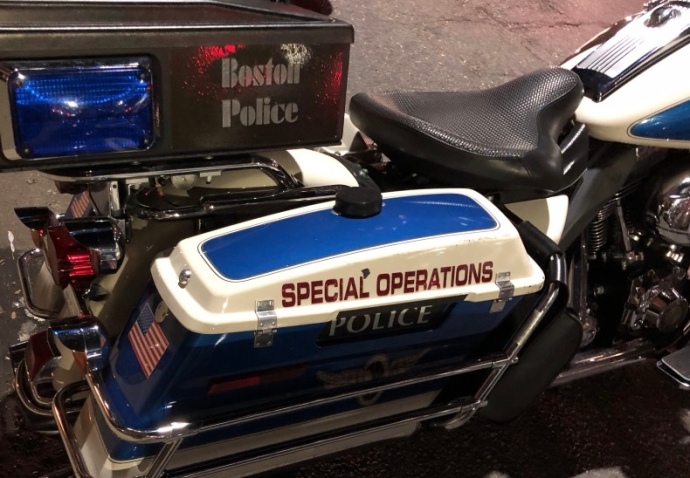 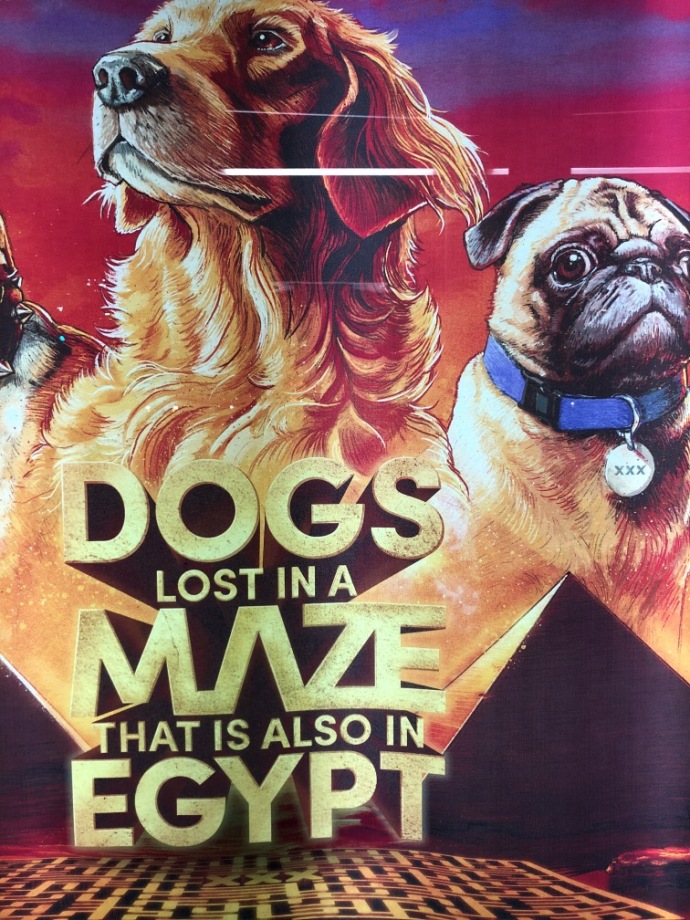 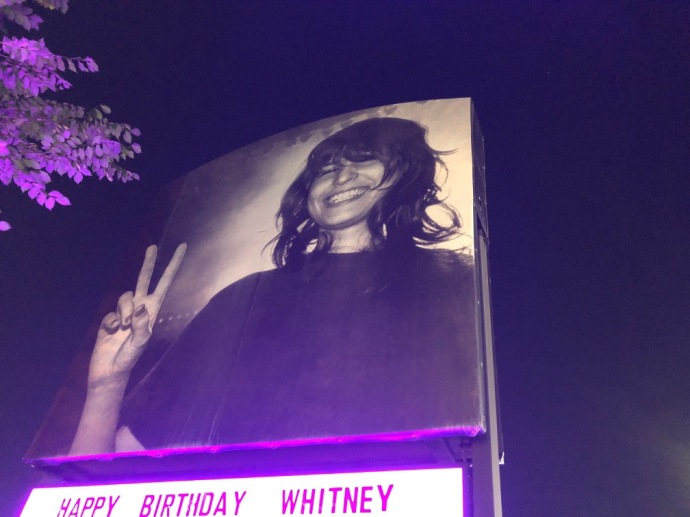 It drives me nuts what happened to Whitney Houston, whose birthday was yesterday. Here and here are some of her amazing live vocal moments:

Feel free to comment about what drives you nuts and what helps you cope.

I hope gratitude doesn’t drive you nuts, because I have a lot of it for all who helped me create this post and — of course! — for YOU. 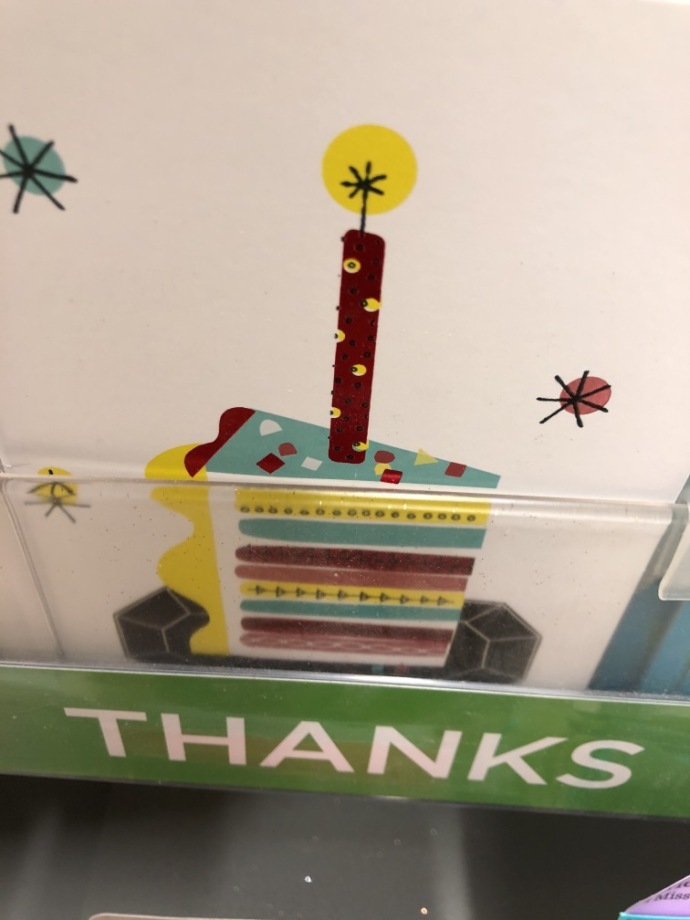 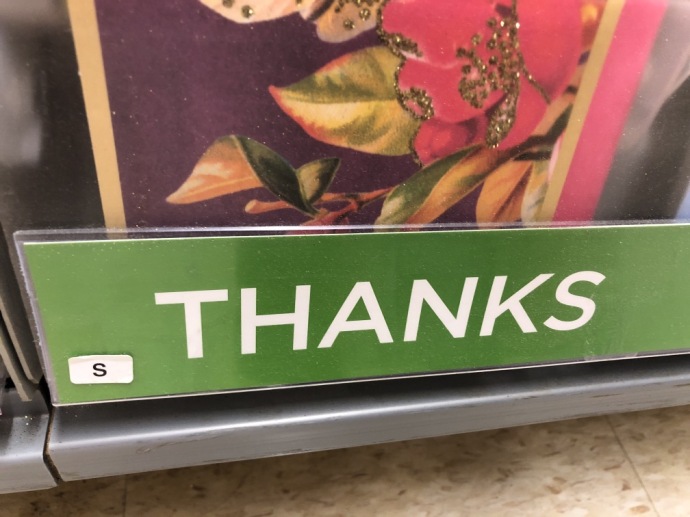 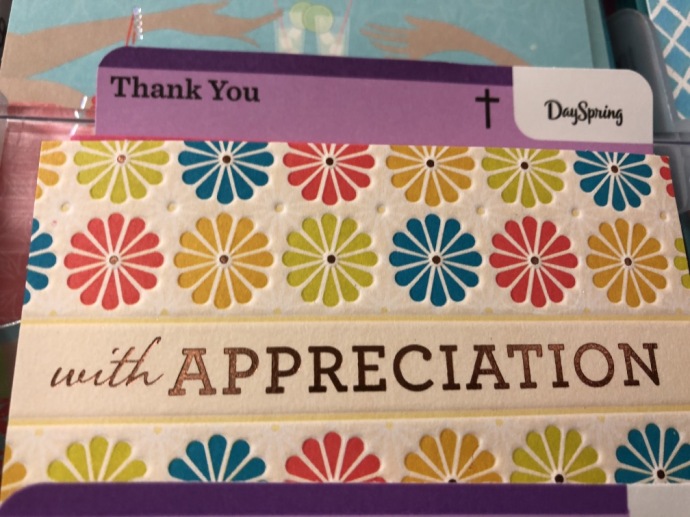 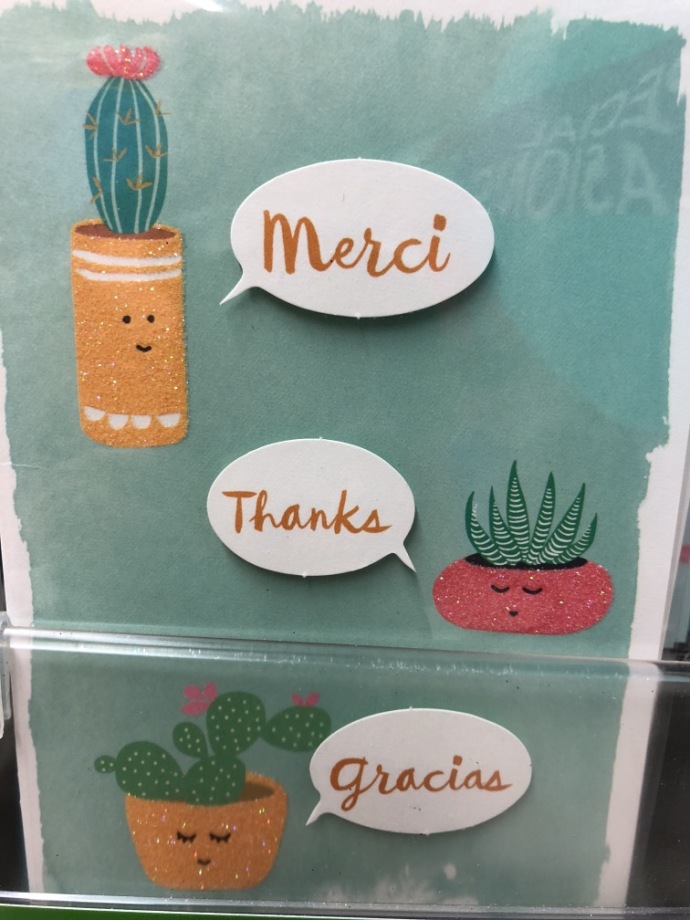 If you were going to write a post titled “If,” how would you start?

If you were going to use a book of interesting questions for group therapy, which one would you choose? 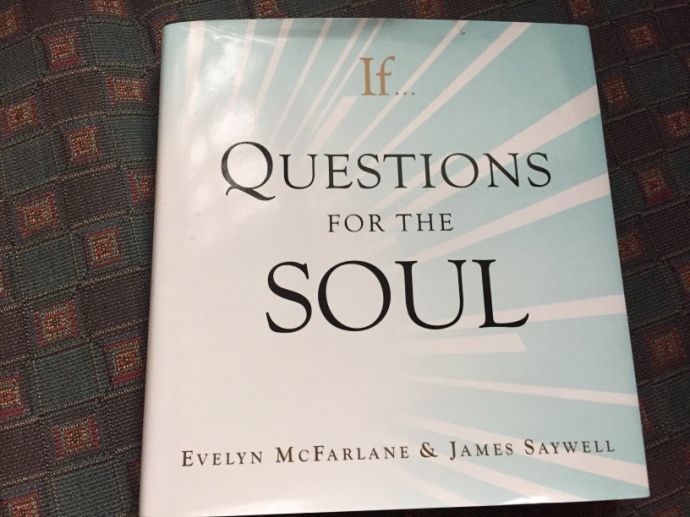 If you were going to take photos for your thirteen hundred and twentieth consecutive daily blog post, what would they be? 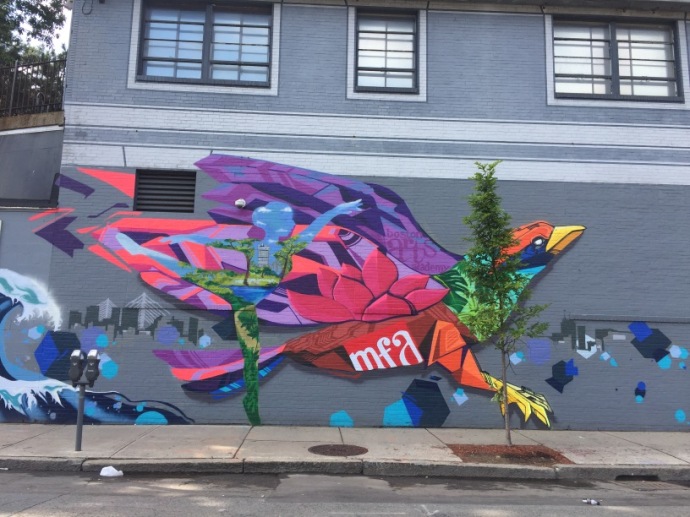 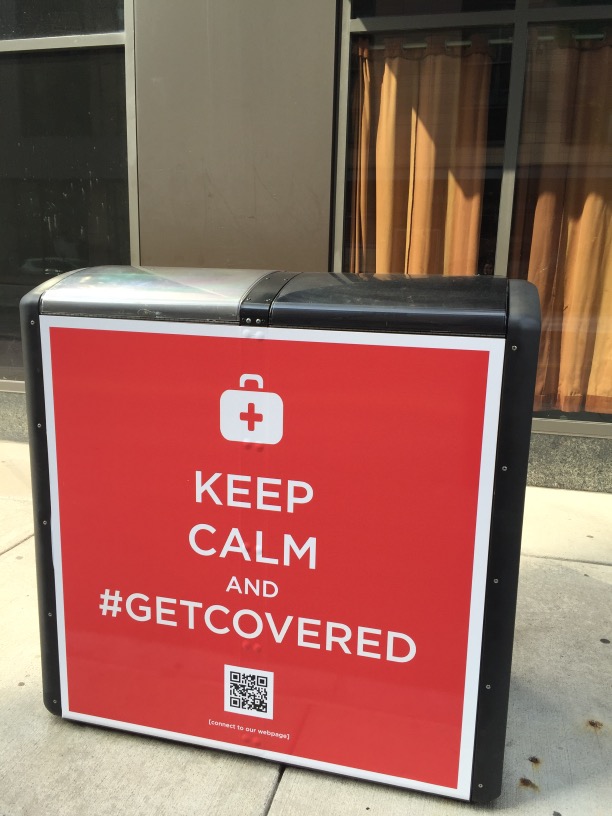 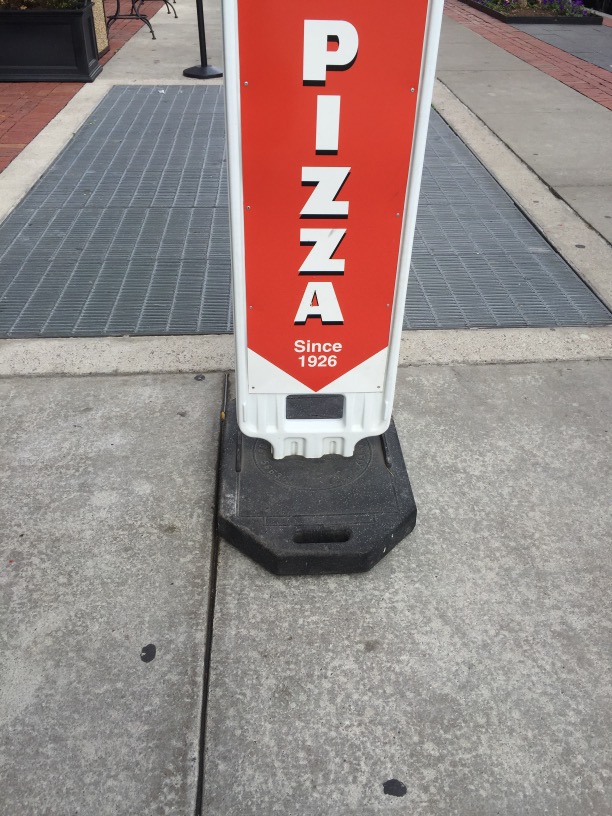 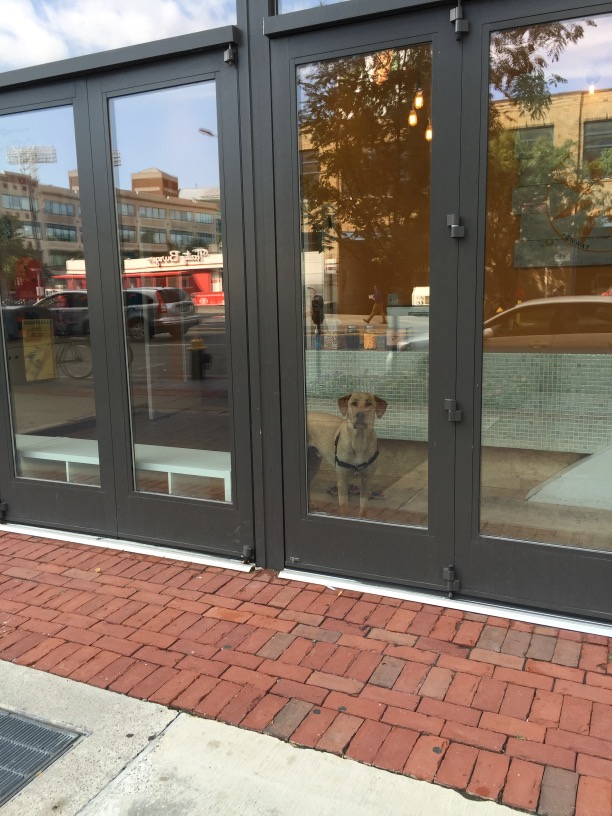 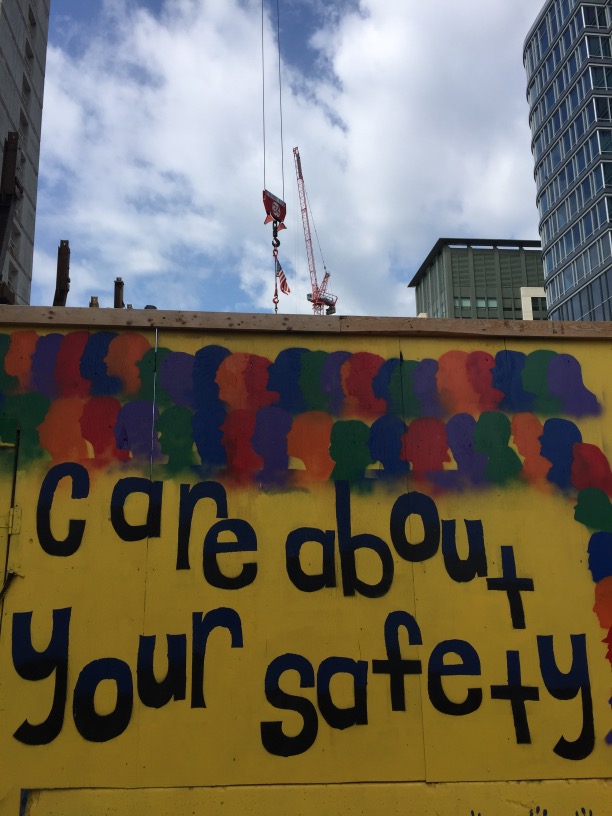 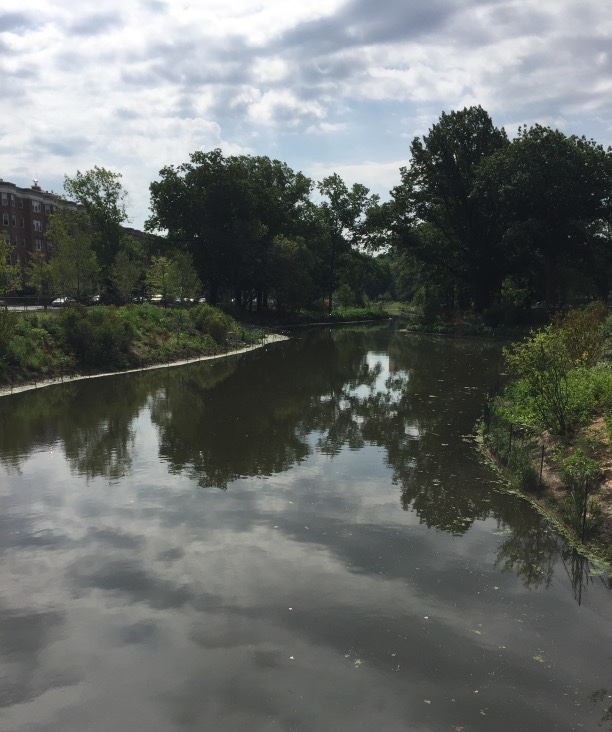 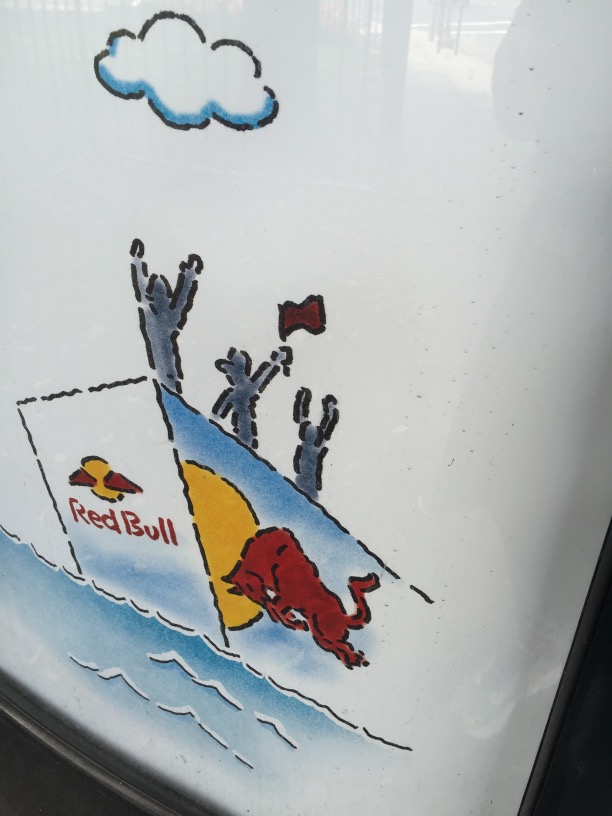 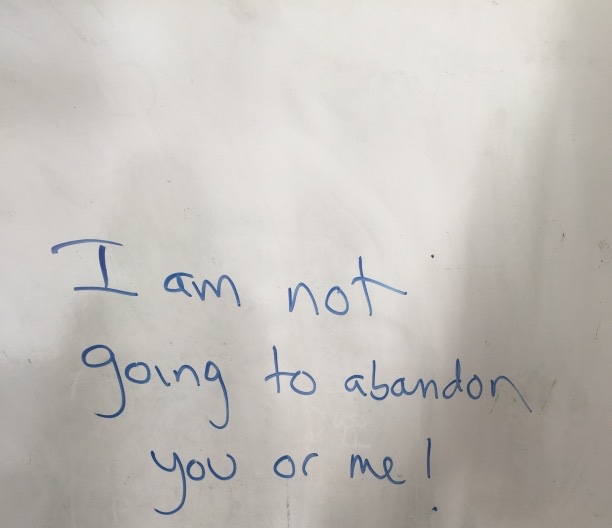 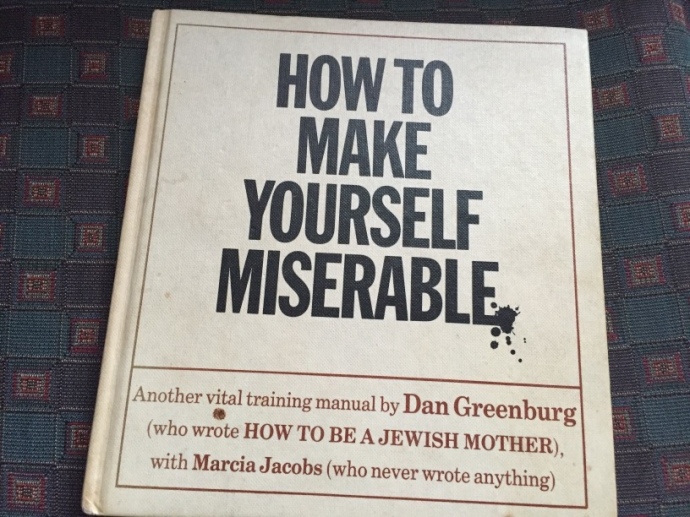 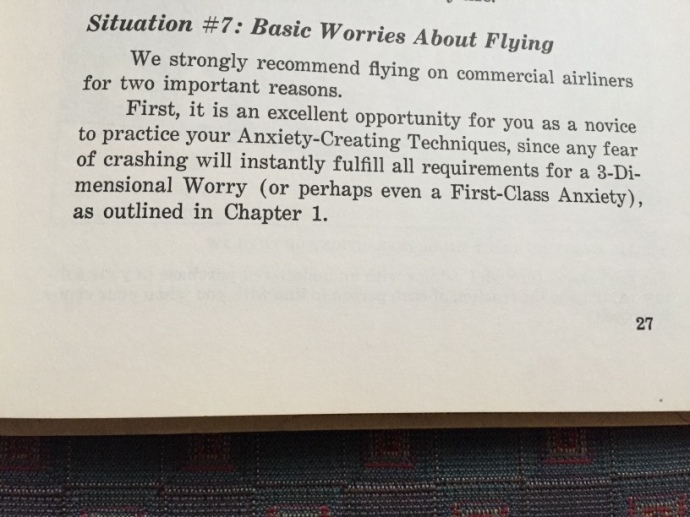 If you had to choose a favorite photo from those, what would it be?

If you wanted to introduce some music in a blog post, how would you do that? 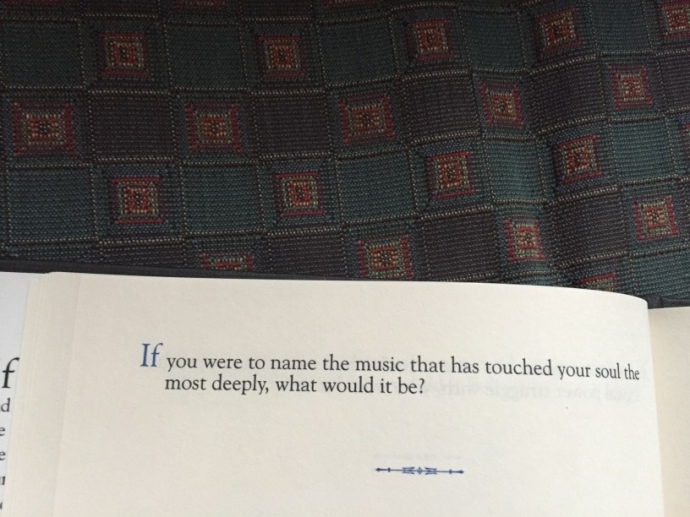 If you were going to provide a link to that music, would you put it here?

If you were going to answer one question in this post, which one would you choose?

If you were to ask your own “If” question, what would it be?

If you were going to end a blog post (or anything else), how would you end it?

If you always end with gratitude, why would you do anything different today? Thanks to all who helped me create this post and to you — of course! — for reading it.

Oh, I have WAY too many things I’d like to write about today.

Let’s start with some continuity, shall we?  In yesterday’s mysterious blog post, this was part of the opening gambit:

“The blog’s afoot, Michael!” I cried, as I ran — my feet descending the stairs clad in but one purple sock — to retrieve my cell phone.

Sometimes, I have fantasies of people reading my posts verrrrrrry carefully: for clues, for meanings, for all the friggin’ things I’m putting in them as I’m composing them.

Why wait for other people to start, though, when I can do that myself?  Therefore, let’s examine that quote from yesterday’s post, verrrrry carefully.

I see one theme emerging, almost immediately.  The dichotomy of OFF/ON  (in the realm of socks): 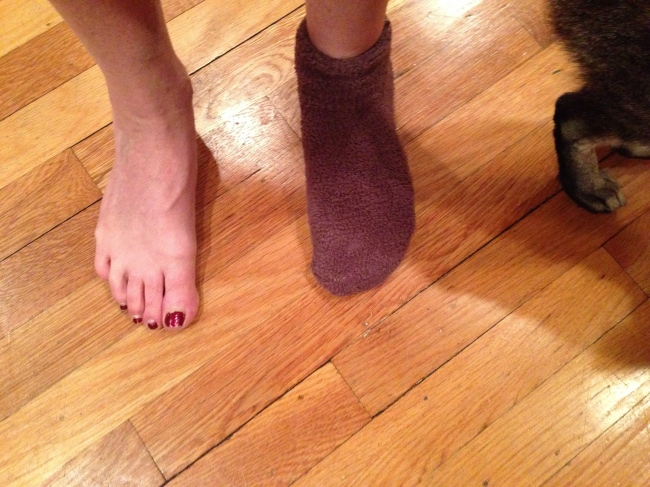 Now, if you look at that photo — which definitely does demonstrate the Dichotomy of OFF and ON, sock-wise — what clues emerge from that photo? What might we deduce about that, regarding when that photo taken?  Was it yesterday, The Day of the Wicked Pisser?

Well, one of the  Wicked Pisser suspects IS in that shot. So perhaps that photo was taken yesterday.  However, is that a PURPLE sock?

Right now, I can imagine people crying out, in Blogging Land, “Ann!  What IS IT you want us to see, in this post?  Are we suppose to be paying close attention to the fact that, when you sleep, one sock usually comes off?  Is THAT it?  Do you want us to be as exquisitely aware — as you are — of space and time?  WHAT??!!!!”

Here was my intention, when I started this post today:

I wanted to write about opposites, including: 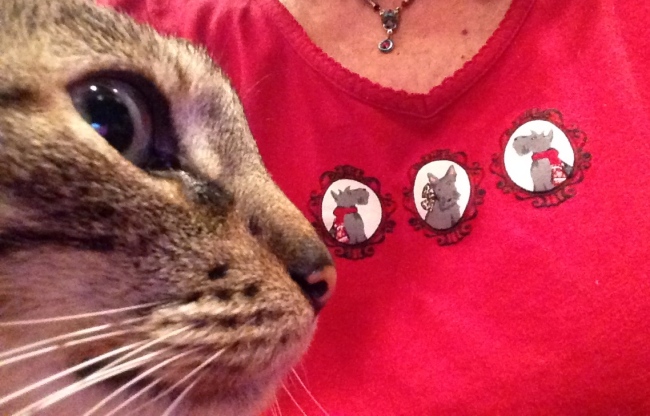 Well, because of my usual motives, when blogging. These include:

Have I been playful? I think so.

Have I been authentic?  I always go for that (even when I’m being mysterious), so ….Yes.

Have I fulfilled past promises? Well, I promised my fellow blogger, The Culture Monk, in the comments section for this pre-New Year’s post, that I would try to include some photos of dogs as well as cats, in 2014.  So …. Yes.

Have I let go of anxiety?  Not quite.

Well, then, what IS the anxiety you want to let go of, today, Ann?

How much time do we have?

According to my calculations, we have about 20 minutes. Okay!  Ready, set, go!

In the moment, I am anxious about:

Hmmm. I still have 19 minutes left, to complete this post. So, perhaps, I could tell you about other anxieties that occurred to me, earlier this morning, including the thermostat being OFF again, which was quickly returned to ON (thanks to an assist from my bf, Michael).

Or, I could tell you about my anxieties regarding being on time, which pretty much always come into play when I’m writing in the morning before leaving for work.

But you know what?

I think I’ve written enough about these anxieties, for people who want to look at my posts verrrrrrry carefully, like this guy: 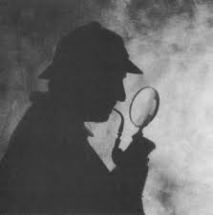 The game (and my work) is afoot, so … gotta run! Thanks to all, for reading today.

Things are going well at work.

I’ve been enjoying writing this blog.

I feel like I’m learning a lot, every day.

So what’s the problem?

Why am I anxious, fearful, wanting to hide, and irritated? Why am I focusing on worst case scenarios?  Why am I feeling overwhelmed by decisions I need to make about packing and so on, when I know there is no right or wrong decision, and it’s all solvable?

Although I usually believe that everything makes sense, on some level.

Well, maybe I could try this: just be with the feelings.

Be pissed off and irritated, for no reason.

Be anxious and fretful, for no reason.

Instead of trying to overcome those uncomfortable feelings with positive re-thinking, maybe I could just be irrationally and unreasonably cranky, right now.

Okay, I’ll give myself an assignment: to have all those feelings I feel uncomfortable with right now:

Then, I put my laptop aside, and was able to fall asleep.  (Yay!)

Then, about an hour later, I woke up and text-messaged (!) my bf, who was downstairs:

I didn’t know if he would see the message, but I guess he did, because he came upstairs and we had an amazing talk about topics including childhood experiences, guilt, depression, and people we knew who had tried to commit suicide (and one who had succeeded). That might sound like an awful conversation to have at that particular time, when my hope was to fall back asleep and feel refreshed and ready for the rest of my trip preparations. But the conversation also included another topic. Love. So it was awe-ful, in a different way.

After the conversation, I cried. Hard.

It all helped.  And I fell back asleep.

Now it’s morning. And there are several things I have to do, including bringing my car into my mechanic for some unexpected, major work.

So what is it that I would like to write this morning, before I end this blog post?

I am afraid of flying.

Actually, as an old friend pointed out to me a long time ago, regarding my fear of heights:  “Ann, you’re not afraid of heights. You’re afraid of dying.”

Every time I’m going to fly, my busy human mind goes lots of places (as human minds do).  And my mind goes to the possibility that the plane will crash. Which affects my mood. Which increases my anxiety.

And which makes me feel like I need to get everything done, now, because what if I’m gone, tomorrow?

While living each day like it could be your last (something I’m pretty good at, with good reason) has an up side, for sure…

Like most things, it has a down side, too.

Before I close, I wanted to introduce you to a stranger I met yesterday.

I was walking around Harvard Square, in Cambridge, getting some foreign currency, playing with my travel anxieties by “rehearsing” various travel-y things, and pretending that I’d never been to Harvard Square before, when I walked by this guy: 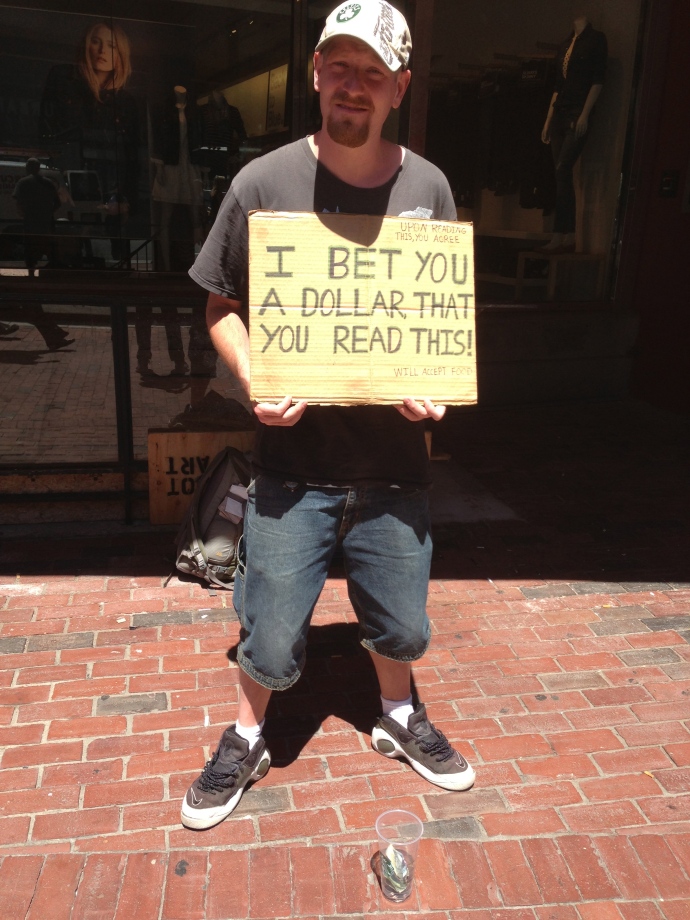 I was distracted by lots of things, so it took me a moment to take that in.  When I did, I stopped, took out a dollar, and came back.  I told this guy, “I used to be in advertising, and that’s the best ad I’ve seen in MONTHS.”  Then, we had a great little conversation, where I ended up telling him that I was nervous about flying. He said, “Oh!  I understand!  But you know what?  Flying is the safest mode of travel.” And he told me that he knew what he was talking about, because he used to work for Delta Airlines.

And as we were having our conversation, several more people stopped, said something appreciative to him, and put money in his cup.

He also told me that he had several other signs he used.  He recited them all, with pride. I asked, “Which one does the best for you?”  And he gave me the answer I expected, “This one.”

Then, before I bid this gentleman adieu, I took his picture, told him I’d like to put him in my blog, and asked him his name.

Thanks to Caspar, friendly creatures everywhere, and — of course! — you, for reading today.  Here’s hoping I’ll be continuing this blog, daily, on my travels with my son.