My 16-year-old son, Aaron, and I are really enjoying the Edinburgh Festival Fringe, where there are always many performances of comedians, comic actors, and other funny people available, in any particular moment.

It’s funny, how I’m not taking a lot of “good” photos during this trip, so far. Here’s the punchline about that: I am focusing on the current moment, rather than focusing my shots.

Here’s what’s happening in the current moment, as I am composing today’s post: I am waiting for 10 photos I took yesterday to load into WordPress, so I can show you — with very imperfect images — some of the funny people Aaron and I saw yesterday.

Punchline is a movie about stand-up comics, starring Tom Hanks.

I sometimes have trouble remembering the punchline of jokes, especially if I’m anxious about impressing somebody with my sense of humor.

Despite my imperfections, many people I respect have told me they think I’m funny.

Hey!  It seems like WordPress has actually loaded all the photos, although I can’t see them.

I am now going to attempt to insert 9 photos into this post (in order of appearance). Drum roll, please …. 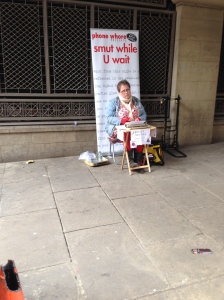 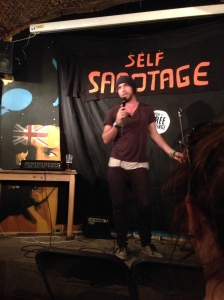 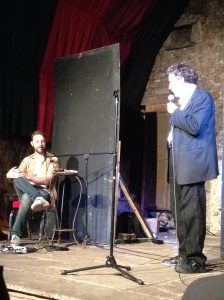 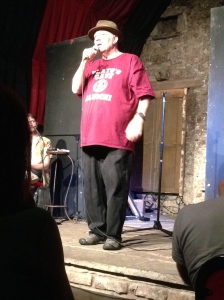 Phew! That seemed to work.  The punchline, there, is that the very low data-transfer limit at our hotel did NOT seem to get in the way.

Here’s my next punchline: I want to finish up this post soon, so I can start another day enjoying the festival with my son.

I would like to write a little more, though, before I wake up my son.

I am not going to try to remember punchlines, right now, from all the great comics we saw yesterday.  And I’m not going to tell you the names of all the comedians pictured above.

I will tell you this. Yesterday, my son and I saw Ron Lynch, my stand-up comedy teacher from the 1980’s (previously appearing on this WordPress stage, here, and shown above in the next-to-last photo),  in his midnight show, called “Tomorrow.”  And we saw a special edition  of “Tomorrow,”  where the comedians not only did their routines, but also shared their personal, non-routine memories of Robin Williams.

Okay!  Time for me to end this post. I’ve got to get my son and myself out into the Edinburgh air, so we can spend another funny day together (which will most likely include shows with many hilarious people, like Eddie Pepitone, shown in the last photo, above). Also, we’re planning on having dinner with Ron.

One more punchline, before I publish this.

After we finalized plans, yesterday, to have dinner with Ron, I said to my son (who started doing stand-up comedy six months ago), “Well, Aaron!  Having me as your mother has finally paid off.”

Thanks to Aaron, Ron, Eddie, Robin, and other funny people, who have enriched my life in many ways. And for my last-but-not-least punchline … many thanks to you, for your appearance here on my WordPress stage, today.