Yesterday (my last work day before a two-week vacation),  I decided that the right thing to do was to go into work for a few hours in the afternoon, despite my running an awkwardly inconvenient fever two evenings before.

During my time at work yesterday, this was the only thing I awkwardly wrote on my white board: 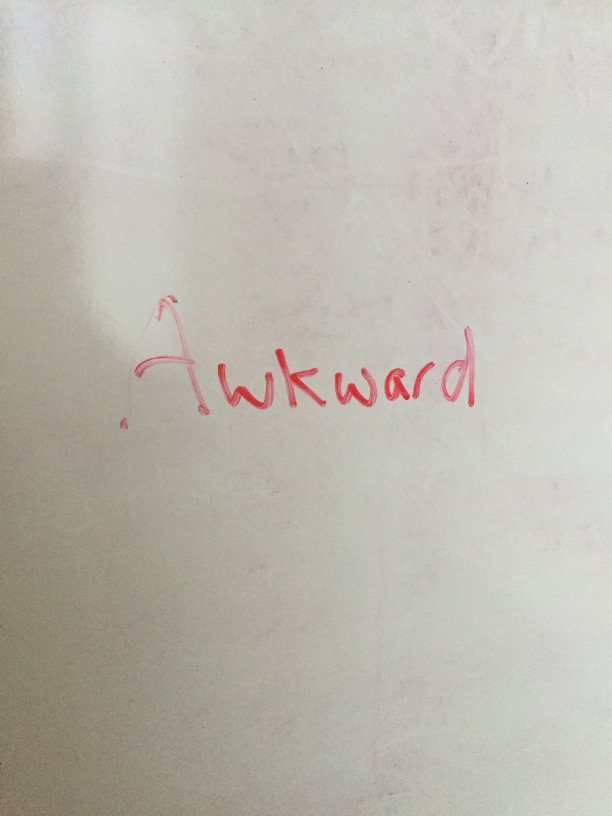 I hope I can explain, non-awkwardly and clearly, why “Awkward” was hanging around on my white board yesterday, awkwardly alone like that.

I wrote “Awkward” during a final “termination” session (terminating therapy is described further and perhaps somewhat awkwardly in this here post), when a patient and I said goodbye to each other after working together for several months.  This termination session had been cancelled and rescheduled several times over the last week or so, because of the extreme Boston winter weather, which is making it supremely awkward to get anywhere these days.

I asked the patient, in yesterday’s termination session, what it was like for him to say goodbye to me (or to anybody else), and that’s when “Awkward” showed up.

Personally, I did not feel awkward about the word “Awkward” showing up in that way, because I think a lot of people feel awkward when saying “goodbye,” and I think it helps make the situation less awkward by naming the awkwardness.

What do you think of that awkward sentence, above?

I hope you don’t feel awkward about expressing your thoughts and feelings about anything I’m awkwardly including here today.

(I feel a little awkward writing this now,  but I think I might have too much to show and tell today about the topic “awkward,” which might make this post awkwardly long and confusing.)

Where was I, before that awkward digression?

Oh, yes. After I took that first photo yesterday, I knew “awkward” would be the topic today, and then I saw “awkward” everywhere, especially when I was trying to make my way home through the very awkward snow, ice, and super-cold temperatures in the Boston area. But I didn’t want to stop in the middle of any road and take photos — that would have been awkward, for lots of reasons.

I did manage to capture this one shot of the awkwardly-not-so-great outdoors: 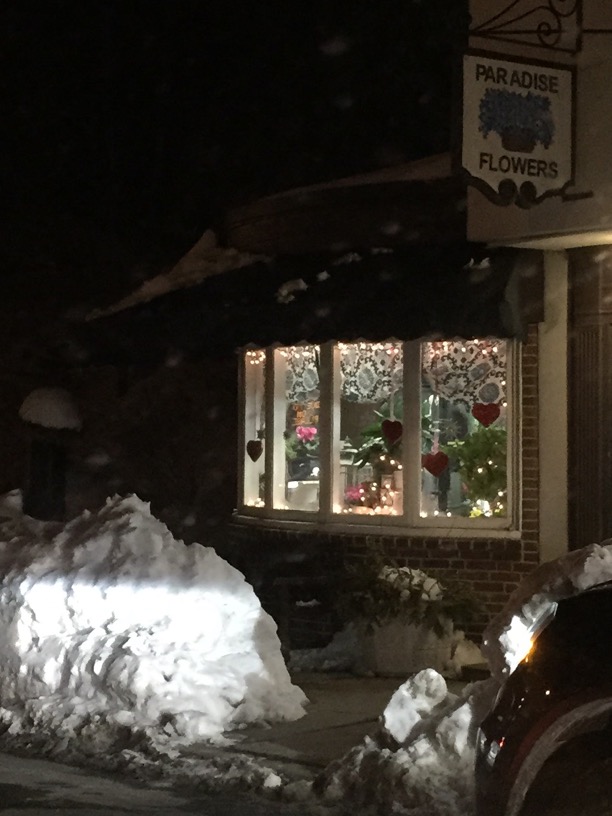 Hey!  That photo reminds me, awkwardly, that it’s Valentine’s Day today. However,

Also, the name of that shop  — “Paradise Flowers” — is awkward, considering the current circumstances in the Northeast USA.

A few nights ago, when I was unknowingly coming down with an awkward fever and awkwardly taking these photos at Whole Foods Market (awkwardly presented before in this blog post, here) … 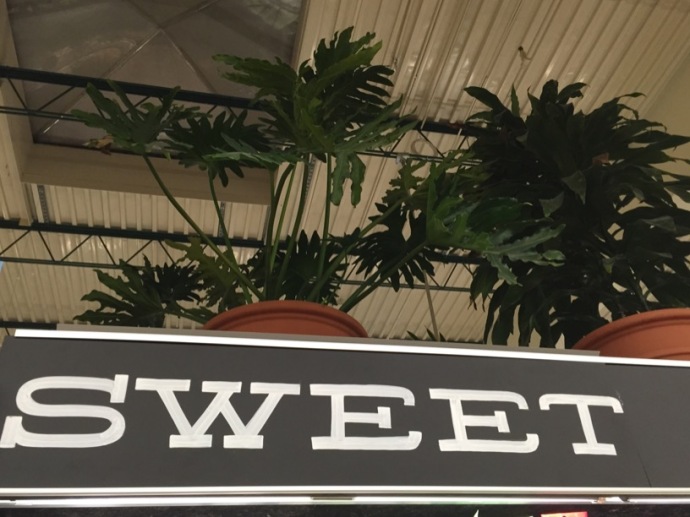 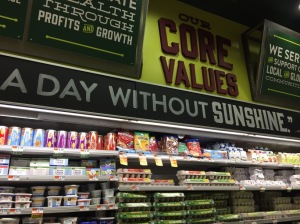 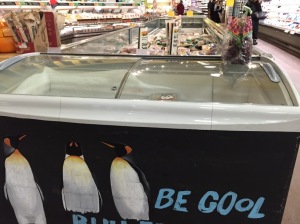 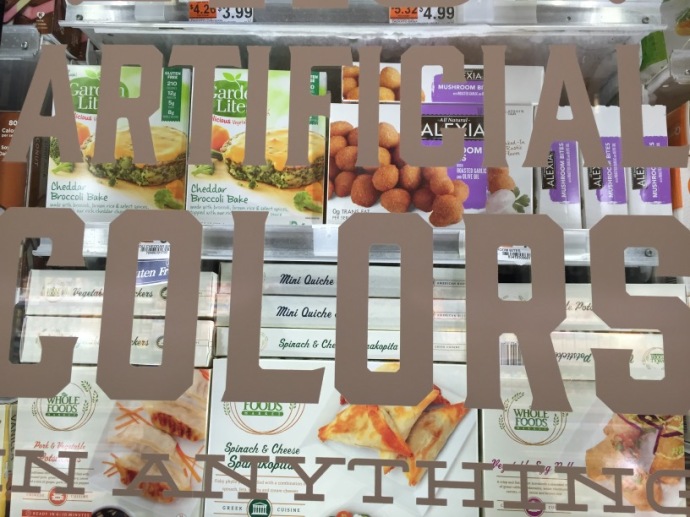 … I awkwardly slipped away from Michael and found a Valentine’s Day card for him. Then, I awkwardly ran to an open line and asked a nice cashier to RING THIS UP, QUICK! because I was buying it for my boyfriend who might awkwardly appear at any moment, and she got awkward and frazzled, but we managed to complete the transaction without Michael awkwardly spoiling the surprise.

I just took an awkwardly fuzzy photo of that Valentine’s Day card, but uploading photos has been awkwardly inconsistent for me lately (which is particularly awkward timing, because of the previously awkwardly mentioned two-week trip to California), so I’ll just awkwardly tell you this: the card has a picture of a duck.

More “awkward” thoughts from your awkward WordPress host, in the awkwardly cold and snowy here and now:

Here’s another awkward segue: After I got home from work, yesterday, my downstairs neighbor Karen’s dog, Faxy, ran upstairs into our apartment and had a close-if-not-awkward encounter with our very non-awkward cat, Oscar. I would feel very awkward if I did not show you some of these pictures, as I promised Karen yesterday I would, but it’s awkward for me to decide which ones of the many photos I awkwardly took yesterday to awkwardly share with you now. 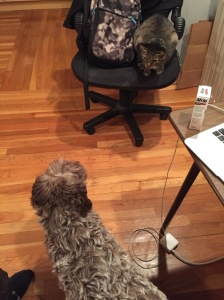 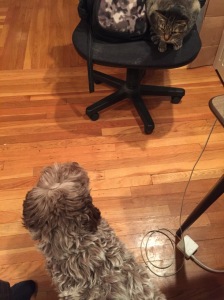 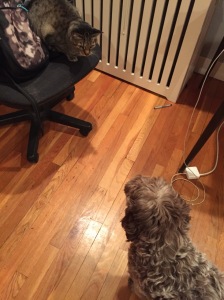 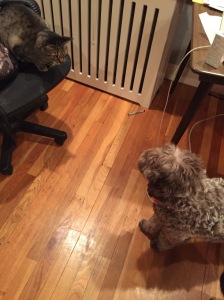 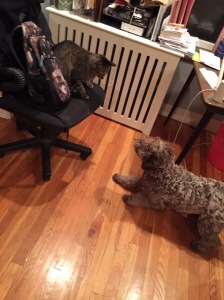 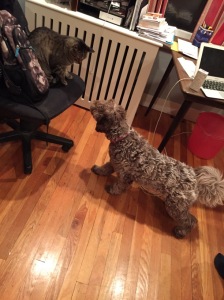 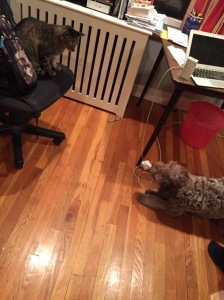 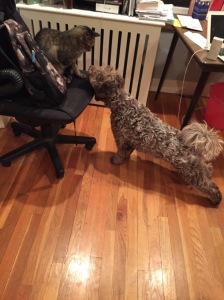 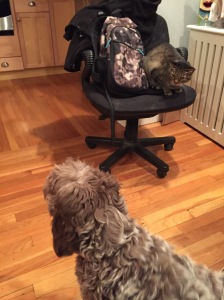 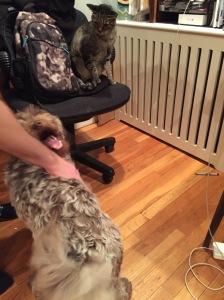 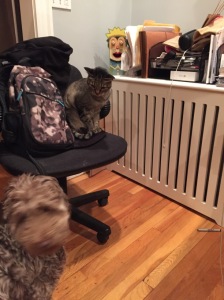 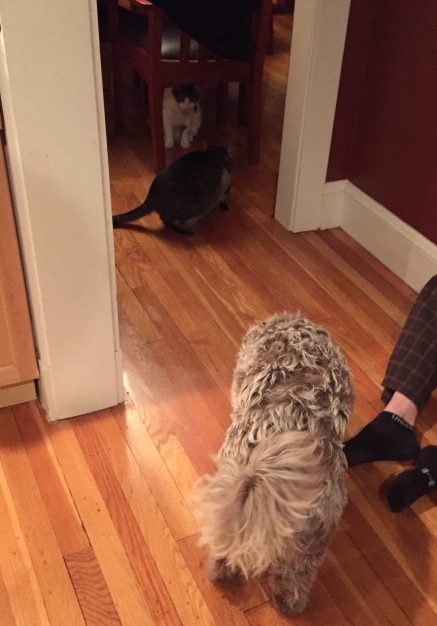 That last awkward photo includes the awkwardly elusive and shy Harley under the table, who actually seemed to feel LESS awkward with a STRANGE DOG than he does with two of the humans who live with him (including one who actually CHOSE AND RESCUED HIM FROM THE SHELTER).

Here is one more awkward image I noticed last night: 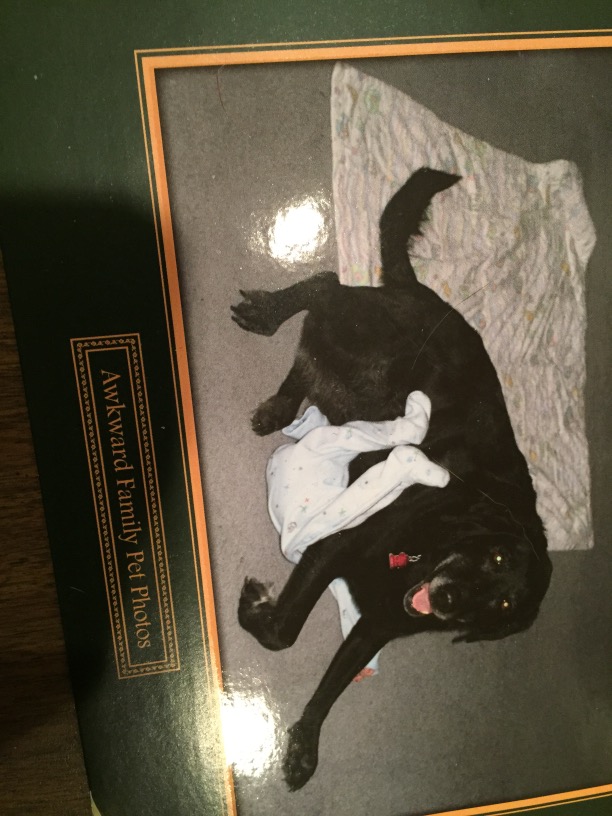 That’s an awkward birthday card I unexpectedly received from one of my old college roommates, Nancy. I just tried to change the awkward sideways orientation of that photo the way I usually do, but that didn’t work.

Would it be awkward for me to ask you what awkward music you might include in this awkward post?

Last night, I decided to choose this song, which has some awkward lyrics about California:

Frank Sinatra and Ella Fitzgerald are singing “The Lady is a Tramp” here at YouTube.

I shall now awkwardly ask, again, for any comments, awkward or not.

Thanks to all awkward and non-awkward humans, animals, weather systems, and computer interfaces who/that (awkward!) helped me compose this here awkward post and I hope it doesn’t seem awkward that I’m particularly grateful to YOU, for visiting today.

Categories: blogging, personal growth | Tags: accepting all feelings, blaming, Boston, Boston winter 2015, Catastrophizing, dogs and cats getting along, Ella Fitzgerald and Frank Sinatra singing "The Lady is a Tramp", escape to California, glitches writing and posting photos, If our plane is delayed today I will lose my friggin' mind, letting go of cognitive distortions | 46 Comments