Let’s start this Obvious Post by stating the obvious:

Some things are more obvious than others. For example, I saw this on my way to work yesterday morning:

That is obviously an auto. 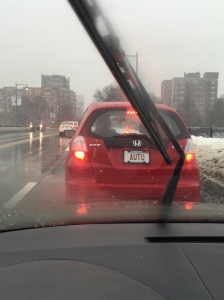 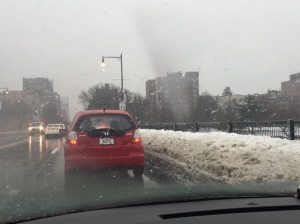 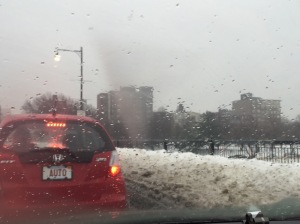 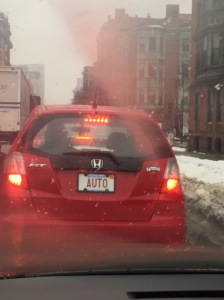 I was obviously following that automobile. If you’ve read yesterday’s post, I was obviously on my way to my co-worker Jackie’s goodbye party at work.

If you saw yesterday’s post, it was obvious that I do NOT like saying goodbye to people I love.  I hope it was also obvious that I hope and wish all the best for Jackie.

Was it obvious to anyone I was going to take photos at Jackie’s goodbye party? 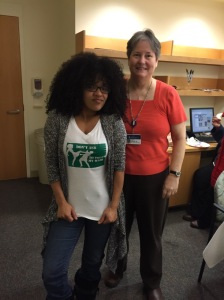 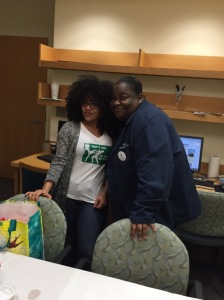 In that first obvious photo, Jackie is obviously wearing a t-shirt (which she made herself) that obviously shows she realizes what’s obvious to everybody else (including my readers yesterday): Jackie has GREAT hair.  (If the words on that t-shirt aren’t obvious to you, they say “Don’t ask to touch my hair.”)

The other obvious t-shirt — “The Queen of Absolutely Everything” — was an obvious going-away gift for Jackie.

I’m obviously spontaneous, because at the last minute, I also gave Jackie this obvious gift: 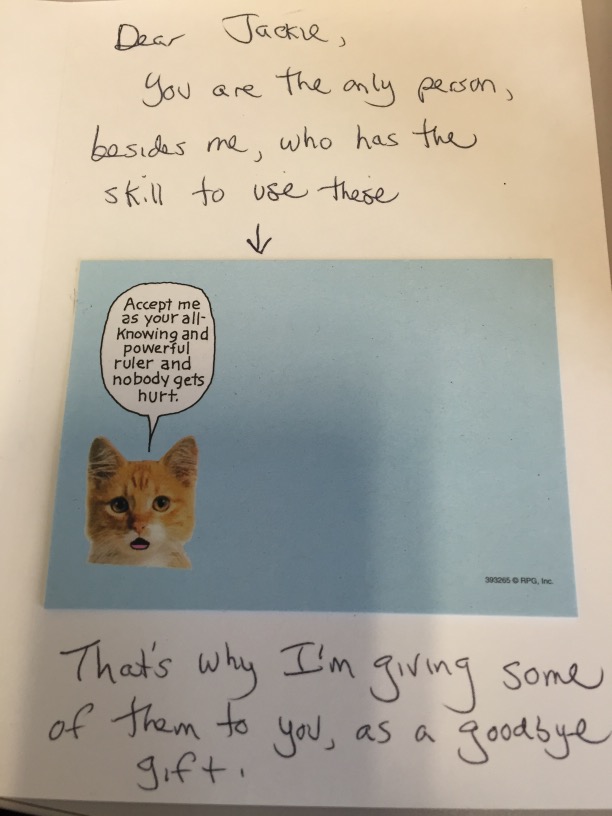 If it’s not obvious to you what those are — they are, well, gee, I obviously don’t know the official name for those sticky things you attach to other things at work. Obviously, I need to call them something, so I’ll try this: sticky memos.

Whatever you call those things, I have a bunch of different ones I use at work. Obviously, I’ve exchanged these with Jackie before. 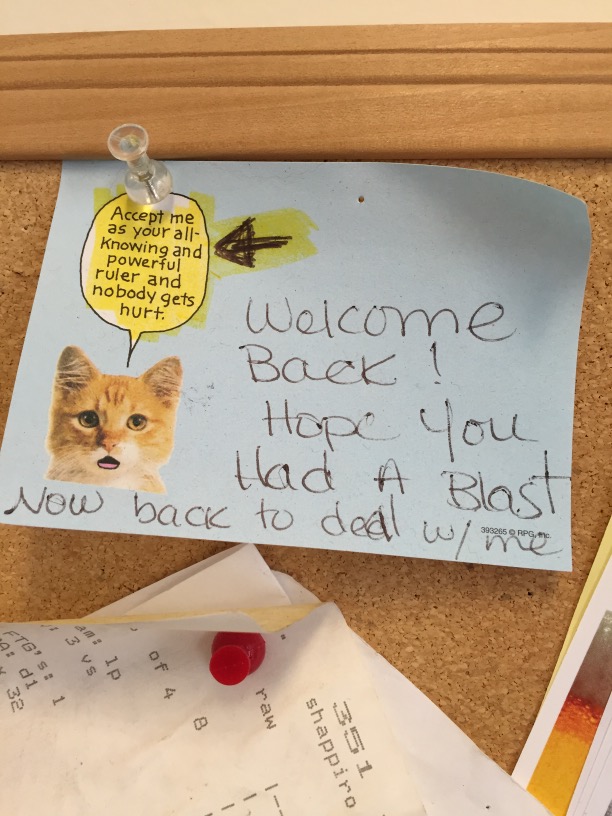 Is it obvious there that Jackie sent my own sticky memo back at me,  to welcome me when I returned to work after a vacation, quite a while ago?  I’ve obviously kept that sticky memo tacked up in my office since then, as an obvious reminder of how much fun Jackie is.

If you know me, it’s obvious I can lose things, temporarily and permanently.  Yesterday, after Jackie’s party, I dropped my pager, and couldn’t find it. It was obvious, to me, that the pager was somewhere in my office. As late and great comedian George Carlin said, in his routine about losing things:

Yesterday, I thought of an obvious way to find my lost pager, after I had “looked everywhere” in my office: I paged myself.

At this point in time, it’s probably obvious to some and not obvious to others that I’ve lost track of Penny the Pen. Here’s a photo of Penny’s last appearance in this blog:

In case it’s not obvious where Penny and I are, in that photo from over a week ago, we were waiting to have a new cardiac test, called a CT scan, at Boston Children’s Hospital.

Here’s an exchange — from the comments section in this here recent post about my recovering from the flu — with obviously wonderful blogger Val Boyko:

Val: So glad your temp is being itself again. You are a sight for sore eyes Ann! How is Penny’s eye by the way?…

Me: Val! I hope this doesn’t make you or your eyes too sore. I actually have not seen hide nor hair of Penny, since I got sick. I fear the worst but hope for the best.

Me: No matter where she is!

What other obvious things should I include here, before I obviously publish this post? Obviously, I have to finish every post, some time (is it obvious that’s usually during the morning?). Today, I have to go into work early to make up the time I obviously missed being sick and also due to 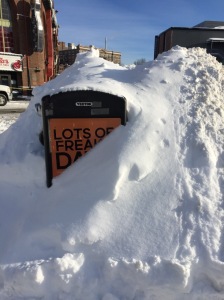 Are there any other obvious photos I’d obviously like to include here, obviously from yesterday? 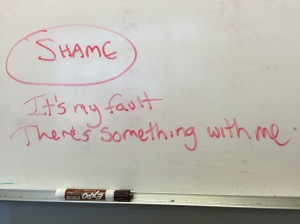 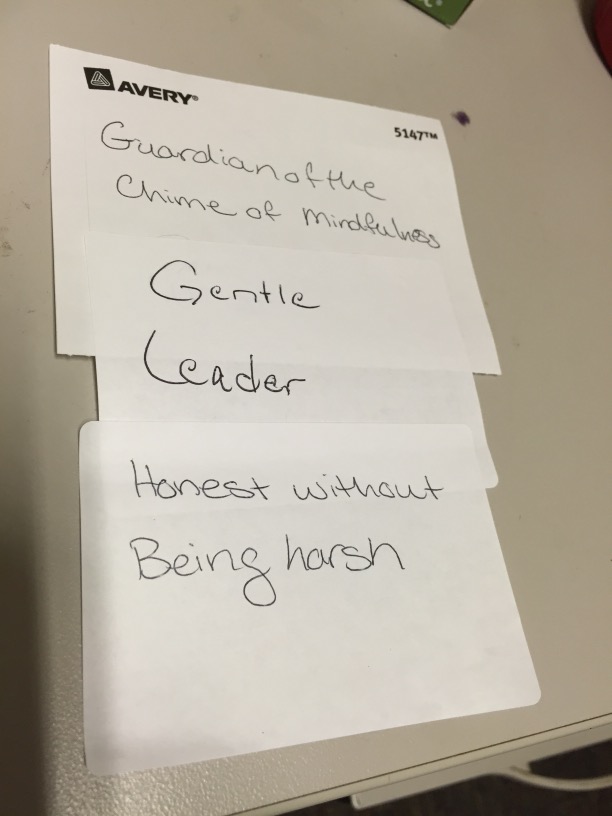 It’s obvious to me that it’s not immediately obvious what’s going on in all of those photos I took yesterday. The last two obvious photos are from therapy groups I facilitated. The final obvious one shows some results of a group exercise about replacing obviously automatic and painful negative labels (like “fool,” “lazy,” “unworthy,” “stupid,” “weird,” “unlovable,”) with positive ones. If it’s not obvious what I’m describing, here‘s a link to a more obvious description of that group exercise.

I hope it’s obvious to those who obviously read this blog that I like to include obvious and also HELPFUL things here. Is it obvious I’m going to do that, today?

How about this obvious thought:

Since each of us only truly knows our own personal experience, what’s obvious to us might not be obvious to others.

Obviously, I need to include some obvious music in this obvious post.

What’s obvious to you, here and now?

Many obviously grateful thanks to everybody who appeared in this blog today and — OBVIOUSLY! — to you, for obviously being kind enough to visit here today.