Here’s a catch-phrase I used to hear when I was in my 20’s, working as a technical/marketing writer at an innovative start-up company in the Northeastern USA;

It’s more a guideline than a rule.

I’m also thinking about another rule* I heard, last year:

Ann, you’re now on anticoagulants for your atrial fibrillation,  which means your blood won’t clot normally. No antidote exists for this medication, so PLEASE DON’T SLIP ON THE ICE.

This guideline/rule — which one of my cardiologists told me — tends to make me more anxious when:

If this post makes less sense than usual, that MAY indicate that I’m developing a subdural hematoma. So if my regular readers notice anything different in my writing style, please contact my nearest health provider.

Oh, yes.  Guidelines rather than rules.

Yesterday, I encountered several rules and/or guidelines throughout my day.

That’s something I wrote on my whiteboard in my office, yesterday afternoon . Why? Because yet another kind, empathic person who sees me for psychotherapy was being too critical of themselves. Therefore, the antidote we came up with together was “The Platinum Rule” rather than “The Golden Rule” (do unto others as you would have others do unto you.)

Here’s another photo I snapped in my office, later in the day:

Note that the barista spelled my name wrong. I used to have a rule* about that: I believed somebody misspelling or forgetting a name was demonstrating that the other person wasn’t important enough.  I no longer think that’s a rule, at all.

That’s a photograph I snapped after I got home, after a long day at work yesterday (which included my facilitating a therapy group starting at 5:30 PM). Even though it was verrrrrry cold outside, I wanted to take that photo of the moon. Because my communication style includes full disclosure*, I want to tell you that even though that moon LOOKS full, it really isn’t.

There are many other things I could write, this morning, about rules vs. guidelines,  but I need to leave soon for cardiac rehab, so I can get my very unusual heart into great shape. The morning session there starts at 7:30, but thanks to the wonderful Carla, Danise and Kathy (l. to r.): 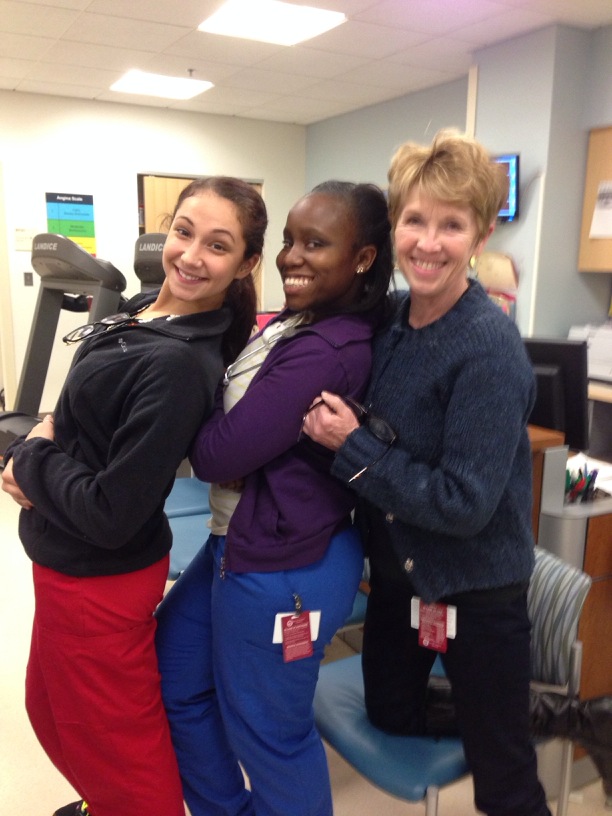 .. that’s more a guideline than a rule.

One of the rules* of my daily posts is that I try to include some music. Instead, today, I’m going to break some conventions and do something new!

I just searched YouTube for “rules and guidelines,” and here are two things I found:

Inspired by that last video, here are ….

Ann’s Rules and Guidelines for the Weekend, Starting Tomorrow:

Thanks to all those who contributed to my writing this post this morning AND to anybody, anywhere who follows or thinks about rules and guidelines (including you, of course!)

* More guidelines than rules, I think.  What do you think?