“Actually” is actually a word I use a lot, in writing and in speech. I’m actually not sure why I do.

Do you say “actually” a lot?

I actually can’t believe that I didn’t take that opportunity to use “actually” in my response there.  Maybe I actually did say “actually”  and my memory isn’t actually  as good as I think it is.

Actually, I believe that Aaron and I have discussed “actually” before.

Yes, I actually took the time to check that out.

I actually didn’t think I’d be writing this actual introduction today. I actually did know that my title would include the word “actually” today, but I thought it might be

because I actually spent some time yesterday resting on the sofa, eating sunflower seeds, drinking tea, and watching some of the movie  Love Actually on television. I’ve actually seen parts of that movie before and I actually vividly remember Emma Thompson‘s performance, but yesterday the movie actually had about 7 minutes of commercials for every 10 minutes of movie, but I’m actually guessing there.

I’m actually trying to relax this weekend before my actually highly anticipated meeting with a new cardiologist on Wednesday, who is actually the top expert on people who actually have my congenital cardiac

which are all words I do NOT love, actually.  Actually, I am going to take the time in this post, right now, to actually come up with a word I actually prefer.

(Here’s some actual background, for new readers: I was born with Congenitally Corrected Transposition of the Great Arteries, wherein actual parts of my actual heart are doing things they weren’t actually designed to do.  I’m actually linking, within this actual paragraph, to actual on-line articles AND previous posts actually written by me, if you want to read more about CCTGA. CCTGA is actually, these days, also called Levo Transposition of the Great Arteries (L-TGA), but I actually don’t remember what or who Levo is and, in the moment, I actually don’t care.)

I actually do care about finding a word I actually prefer to those “negative” words I listed above, so how about I say that I have a congenital (which actually means “born with”) …

although I don’t actually love that word either. How about

I have a congenital cardiac SPECIALTY!

What do you actually think about all that?  Perhaps you might actually come up with a better word. (If you do, could you actually share that, here?)

Actually, I wanted to tell you more, in this post, about my yesterday.

Before I relaxed on the sofa — watching Love Actually (with the two TV snacks I actually want to restrict myself to, if I can actually manage that) — I actually had breakfast with my long-time friend Eleanor. Eleanor has actually appeared verbally, but not visually, in two previous posts, which are actually called

Day 128: I get by with a little help from my friends

both of which could have actually served as the title of today’s post (except for the actual day).

Here are some photos I actually took — with my old, cracked cell phone — during yesterday’s breakfast with Eleanor at my long-time actual, favorite diner (which has actually appeared in so many previous posts, that I’m actually not going to take the time to search for those right now, but you could actually find them, if you want, by searching for “Deluxe Town Diner” here). 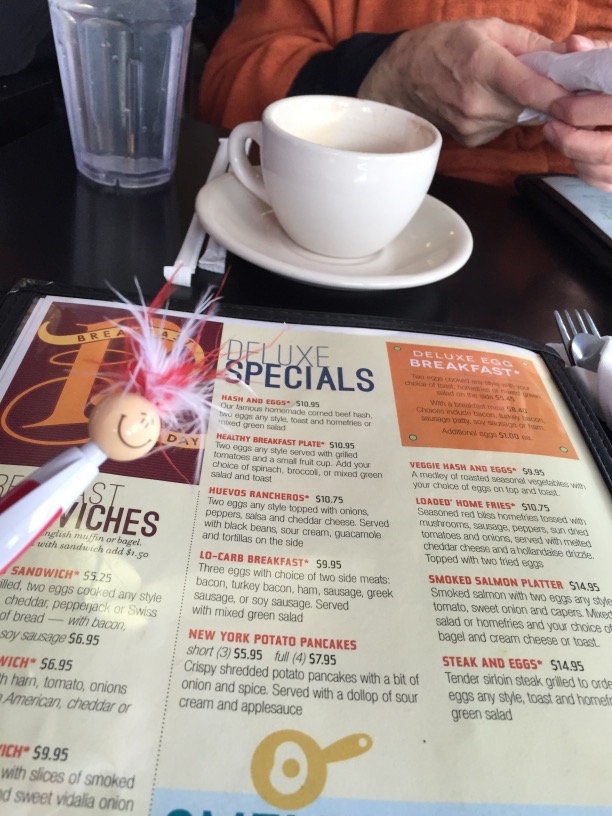 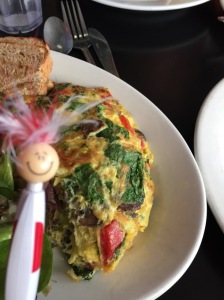 The cast of characters appearing in the above photos include Penny (in the first four shots) and Cindy, Gina, and Kelly (hidden, except for her four fingers). Gina (actually on the right, above ) has actually not seen Aaron for a long time, and when I showed her a recent photo of what he actually looks like these days, she actually yelped with delight. Gina actually said a lot of flattering things about Aaron yesterday, but I won’t include them here, because they might embarrass him, if he actually ever read these posts.

Do I actually sound annoyed there?  I’m not. I’m actually hungry, especially looking at those photos of yesterday’s breakfast.

I actually just ate some of this, with almond milk: 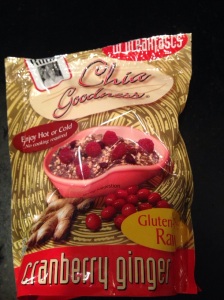 which is actually pretty good.

Now that I actually can think clearly again, I wanted to tell you some actual facts about my time with Eleanor, yesterday:

See! So the name of this post actually could have been “Love Actually.”

Here are some more photos I actually took last night, when I was actually at Panera Bread and PetSmart with my actual boyfriend, Michael, when it was actually snowing, here in the Northeastern United States: 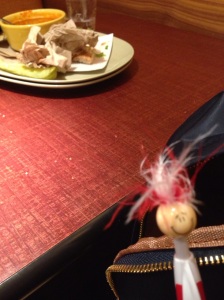 Sometimes I wonder if I’m actually driving Michael — and other creatures around me  —  crazy.

Actually, I’m not actually sure what actual music would actually fit this actual post today.

This actually appeared in my mind, just now:

If you actually want, you can find “You Send Me” by Sam Cooke  here, on YouTube. I actually don’t know why Sam Cooke’s songs have been appearing so much in my mind  and in recent posts (actually, here and here).

Actual thanks to all actual people, creatures, and pens appearing in this post today (actually pictured or not) and — actually — to you, for your actual visit (which I actually appreciate, a lot).

I’m actually amazed that I wrote this whole post without any actual footnotes.

After I actually published this post, I actually realized that some of the photos wouldn’t actually load. I’ll see if I can actually figure this out, today.