Yesterday, I went to pacemaker clinic, in the hopes that an adjustment to my pacemaker’s programming would help me feel better. Why? Because at my recent heart stress test, we discovered that, when I exercise, my pacemaker is speeding up very slowly and in a very limited way.  This is probably one reason I haven’t been feeling so great, these days.

Why is my pacemaker being particularly poky?  Because, for six months, I’ve been in atrial fibrillation and the pacemaker can only do so much, to compensate for that.

Yesterday, I had hopes that my wonderful pacemaker team, including Melanie

(seated, and also appearing in that same post), Lori and Bob

(appearing in Day 62: Self Disclosure) could re-program the pacemaker.

I hoped that the new programming would better support my beloved walks (see hundreds of my other posts, including this, this, and this) and other physical exertions.

Yesterday, Bob tried different pacemaker re-programmings, to help me feel better. We alternated those with exercise excursions around the hospital, including stair climbing and sprinting. After we finished experimenting, Dr. Estes came by to consult, and we all agreed that the new programming might be a real improvement.

However, after I left the hospital, at times I felt light-headed and oddly anxious. When I checked my pulse during those times, I discovered rapid heart rates. Those speeded-up rates would have been great if I’d been climbing stairs or walking vigorously, but … I was sitting still.

And those rapid heart beats made me feel quite uncomfortable, physically and mentally. The pacemaker’s timing felt off — like that of a bad stand-up comic.

What should I do now? I wondered. I had many thoughts, which felt new and familiar, at the same time:

Those thoughts are very familiar, dating back to when I was a small child, dealing with doctors and pacemakers with LOTS of problems.

Those thoughts, repeating and repeating yesterday evening,  were just as uncomfortable and anxiety-provoking as the rapid, mis-timed heart beats.

I sometimes have trouble making decisions — especially about actions where I fear being (1) wrong and/or (2) judged. So yesterday evening, for about an hour, I hemmed and hawed, went back and forth, over possible options and next steps.

I talked to bf Michael about it.

I went over possibilities and consequences, many times.

And I wrote this email to Dr. Estes:

I have been feeling kind of light-headed off and on, since I left pacemaker clinic today, so I been taking my pulse just to check out what’s going on.

I am getting really rapid beats (30 beats per 15 seconds) often when I am sitting or standing still, which feels pretty weird. When I am actually exerting myself, my heart rate isn’t speeding up that much.

Is there a chance this will settle down, or is this an indication that the settings just aren’t working so great for me?

Your sensitive and picky customer,
Ann

Note that I labelled myself there, in my signature. And while labeling (or name-calling) can be an unhelpful cognitive distortion …   I didn’t say I was TOO sensitive or picky.

Hey! I AM sensitive and picky, and that’s …

(see this post for the most recent appearance of AOK!)

As I expected, Dr. Estes responded back, in minutes. His timing is amazing.  Here’s what he wrote:

It is highly unlikely that the new settings are causing your symptoms. I suggest we stay the course for another couple of days and see if things settle down. If you really uncomfortable, or for symptoms intensify, please contact us and of course we would be willing to see you immediately.

When I received that email, my first thought was this: Was Dr. Estes’s reaction “bad” timing? Was he discounting my experience?
.
Then, I remembered something else.
.
Dr. Estes, last year, said one of the most amazing things any human being has ever said to me:
.

Ann, if there is one thing I’ve learned … it’s never to doubt you.

.
When Dr. Estes said that to me,  it was in the middle of a lot of health uncertainties and anxieties. As usual, his timing was impeccable.
.
Since he voiced that, last year, it has echoed in my head, a beautiful antidote to my self-doubts and  fears about how others will perceive me.
.
I heard that echo again, as I looked at his email yesterday. And I knew it was the correct time for my response:
.

Because I am going to a conference this Friday through Sunday, and the rapid heartbeats are feeling quite uncomfortable,  I would like to return to the old programming for the short term.  Could I come by tomorrow (Thursday) morning? I am not due at work until the afternoon.
.
Thanks for your understanding and patience.
.
All the best,
Ann

.
And, as usual, Dr. Mark Estes responded back to me with lightening-quick timing, even though it was night-time, by then:

My medical team IS a sure thing, these days … even if our timing isn’t always perfect.
.
Originally, my title for today’s post was
.

Do you have the correct time?

.
… and I planned to show more of my extensive collection of watches (discussed before, here and here).
.
But, I want to finish my post, in good time, so I can return to my pacemaker team today.
.
However, I still think the timing is right, now, to show you some of my favorite watches, including:.

which previously appeared in this post (and this one, too), 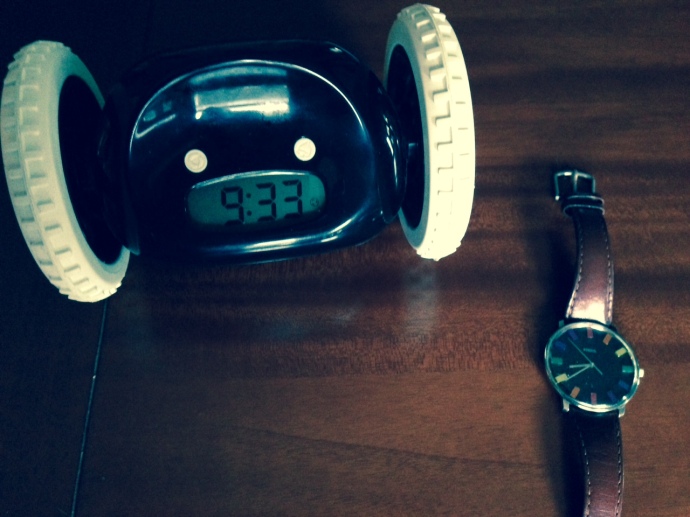 Appearing on the right is the watch I wore yesterday, facilitating a therapy group at work in the morning at work and visiting pacemaker clinic in the afternoon. On the left?  That’s Clocky,  an unusual and intentionally irritating alarm clock I bought for my son and/or Michael, who both have trouble waking up, some times. If you look at Clocky’s face, you’ll see its timing is off, because we haven’t tried to use it yet.
.
What watch should I wear today, as I return to pacemaker clinic in the morning and work in the afternoon?
.
I think the timing is right for the watch on the left:
. 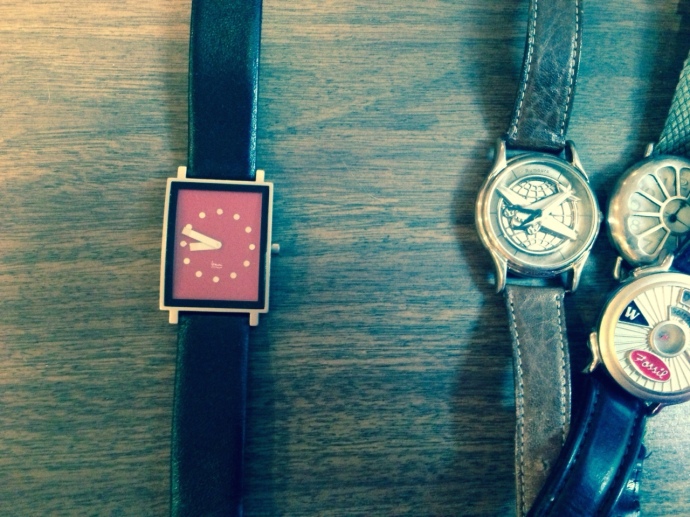 That wonderful red watch was a gift, from Michael.
.
Thanks to my pacemaker team, to Michael, to everybody who has ever listened to me (no matter how imperfectly), to stand-up comics with good and bad timing, to monkeybuzz99 (who posted the video of Clocky doing its thing on YouTube , and to you — especially! — for taking the time to read this post, today.
.
____________
No time for footnotes, today. However, I had time for links … lots of links! How was my timing there?