Reasons for the title of the post?  At least two, to begin with:

I can hear those parrots right now, as I’m typing these words. Here are some of my earlier attempts to capture them: 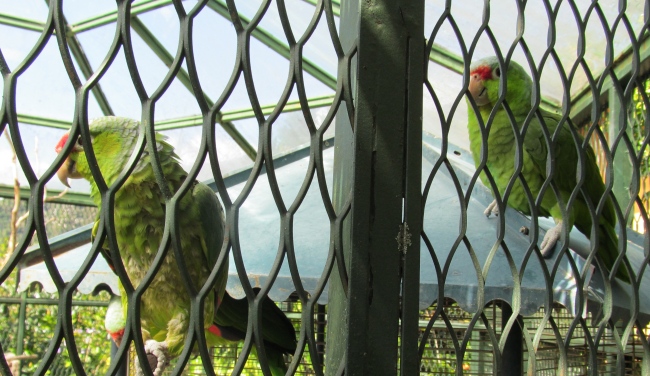 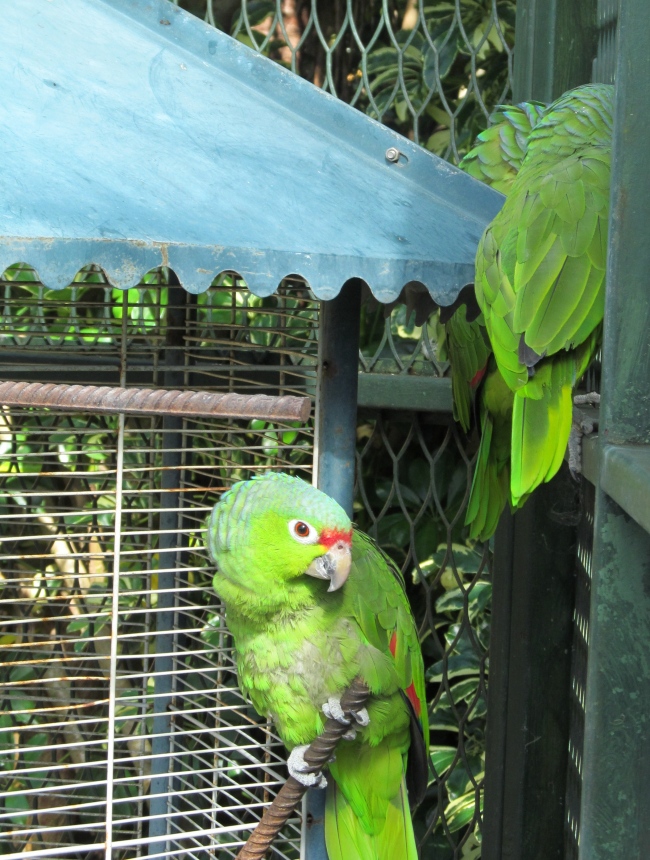 I’ve already asked the owner of Los Establos, Irina, if I can get a closer look at the parrots, later today, so I’m assuming the parrots will show up in tomorrow’s blog post, too … but who knows?

The rest of today’s post will include images (and thoughts) that have captured me very recently (for the most part, yesterday).

Yesterday morning, Rolando Cossu, a tour guide for Beyond Adventure Tours1, took four of us — Peggy, me, and a couple from Texas also staying at Los Establos — on a “Panoramic Tour.”  We were happy when Rolando deviated from the usual four-hour car tour and took us on a trail into the rain forest/cloud forest/jungle/national park/whatever-the-hell-the-right-name is for where he took us.

But why focus on the correct name of where Rolando took us on an adventure?  I don’t want to be captured by Pesky Perfectionism. I want to show you what Rolando showed us …. 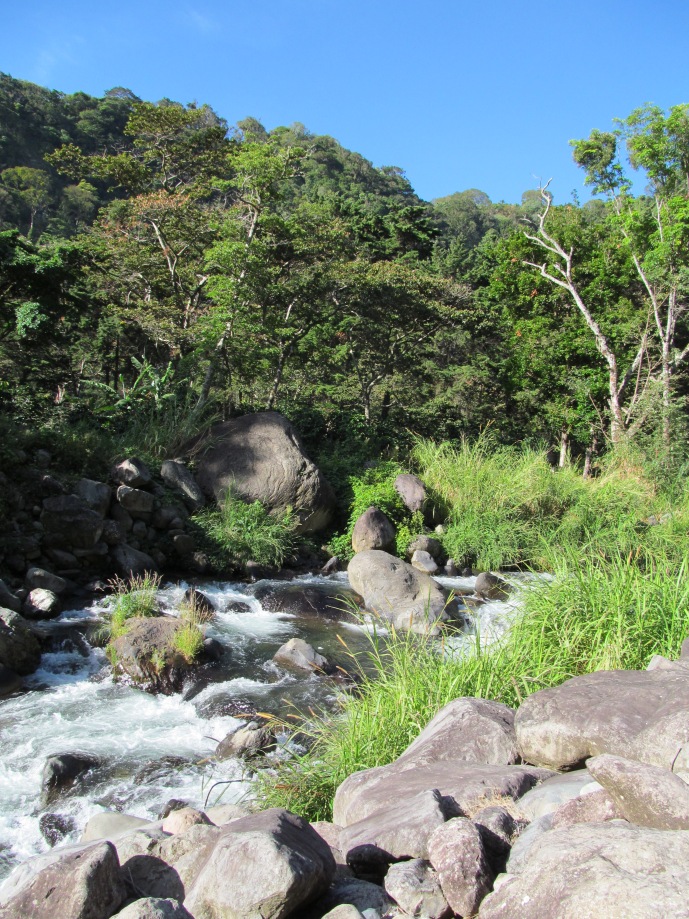 I took that photo, above, on a brief stop, as Rolando was driving us around the vicinity of Boquete, up further into the mountains.

This shot is taken from the car. Rolando showed us that castle, which some British guy in the 1960’s began building  and never finished (if my memory serves me correctly). Rolando said the property has been left abandoned since then, because people think it’s haunted. We found out something about Rolando’s bravery, at that point, because he said, “I’ve been there. I don’t think it’s haunted.”  Here’s another view of the castle:

More beauty, from the car:

Then, Rolando brought us to a hiking trail, and we spent a lot of time, walking, listening, and watching for what was all around is.  This was one of the first things I noticed, by the side of the trail:

Actually, right before I noticed that, I had seen somebody standing, on one of the rocks, in the middle of the brook to the left. I don’t have a shot of that, but just imagine my previous photo, with a slight figure standing, unmoving, on one of the rocks.  I was forming some sort of speculation as to what he was doing there, which was then replaced by attempts to make meaning of the hanging bottles. Rolando explained that these bottles were a new, on-going creation of the figure we had just seen. He said, “He is embarrassed. That’s why he is standing there.”  I immediately projected my own experience as a creator of pieces seen by the public, thinking: “He’s an artist. He’s not sure what people will think. He’s modest. He’s shy. ”

But letting go of THAT line of mind-reading, I moved towards the much-more-interesting possibility of meeting the artist. I walked down to the edge of the brook, and somehow communicated to him that I wanted to know more about his creation. He left the rock, came up to join us, and stood by his work: 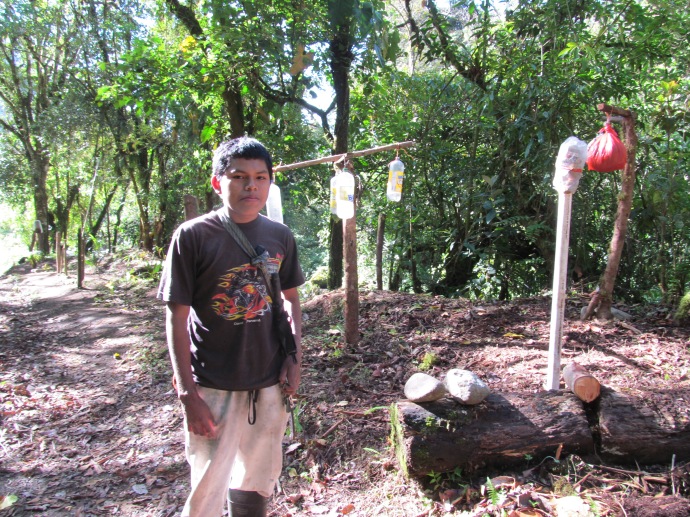 He was okay with my taking those photos. As Rolando translated,  I found out his name — Eliaser — and told him I thought his work was beautiful. I didn’t ask him about his intention or vision (I think I tend not to go there, with artists), but I am grateful he joined us for this part of our adventure.

Rolando had this magical book, that showed and described all the creatures we might see, on our walk:

A lot of visitors to this area are birdwatchers, and the local Holy Grail — the bird of all birds is … the Quetzal!

I did NOT take that photo, people. It’s from the Wikipedia page I found when I searched for “quetzal bird Panama.” I assume that’s the bird we were looking for yesterday, although I’m not sure.  We looked for the Quetzal (among other things), with Rolando’s able and unhurried assistance.

And Rolando found a Quetzal for us!  We spent some unhurried time watching it, with binoculars that he provided.  I believe this is where we found it, although I’m honestly not sure (since I was captured by focusing on the beautiful Quetzal).

I am often captured by my assumptions about my own limitations, and I see myself as “not good” at birdwatching, using binoculars, following directions, and seeing what somebody else wants me to see.  For most of the time that the others seemed to be “getting it,” I felt like an outsider, as I had trouble capturing the Quetzal within my view. Mostly, I saw this: 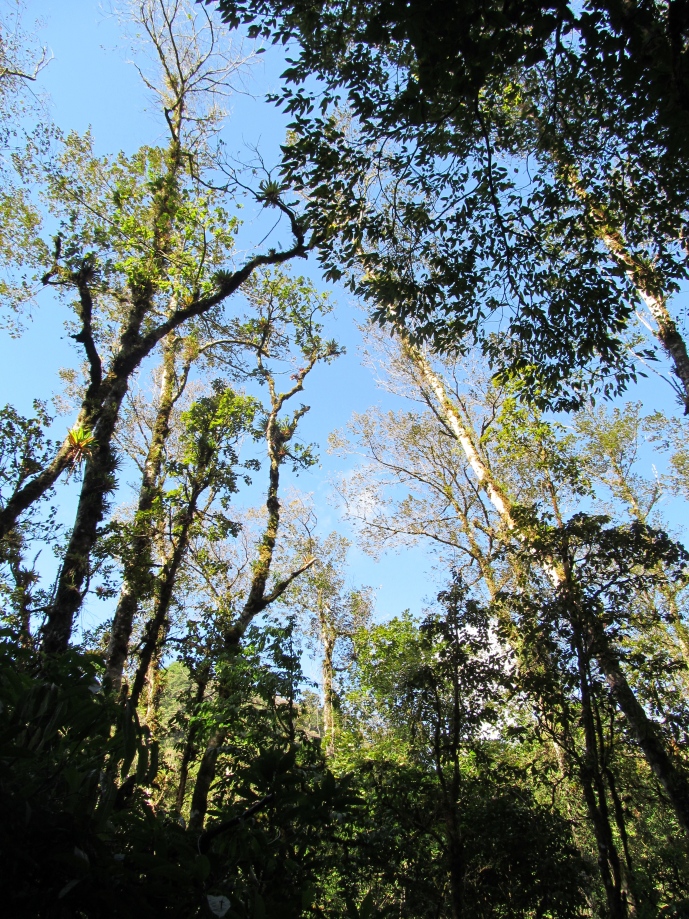 … despairing of seeing more, despite the nearness of the Bird of Birds, which the others all saw, with excitement.  However, I took a breath, lost my investment in the outcome, had faith in myself and my instructor, and …

… I captured the Quetzal in  Rolando’s binoculars, right as it took wing and flew away!   That was beyond an adventure, for sure.

Here’s more of what we saw, as we ascended further and higher along the trail.

I noticed Rolando stopping and inspecting this flower:

When I asked him about it, he said, “I’ve never seen this flower before.”  I appreciated that he let me know that, and I took a close-up of it:

We walked for quite a while, always uphill. And I became captured by old memories, from having lived all my life with an unusual heart, of not being able to keep up with people, especially on inclines.  And I was captured by negative associations with this, including assumptions that the other people accompanying me, that day, were impatient and waiting for me to catch up.  And I was disappointed with how out of breath I felt, yesterday. So I stopped, paused, took a breath, recognized how my present was affected by my past, and tried to be in the moment, letting go of assumptions.

However, when I started moving again, and I found Peggy and Rolando, further up the trail, the old assumptions came rushing back, as strong as the brook by our trail. Those assumptions were:

But I am old and wise enough to check out these assumptions, as soon as I can, these days. So when I joined up with Peggy, I told her I was feeling out of breath, disappointed with my endurance, and told her about my old memories of lagging behind “more normal” people, regarding physical exertion. And I knew I could trust Peggy, because we’ve known each other for about 35 years.  And as I knew, Peggy was accepting, kind, and logical, and helped me “reality test.” That is, she told me something I already knew: this was a leisurely hike with a guide who adjusted easily to the needs and wants of those in his care.

So I cried a little, with Peggy, and was no longer captured by those old memories, assumptions, and feelings of being “different” and “not as good.”

Rolando pointed out many interesting facts about about the beautiful surroundings on the way. He also allowed space for us to wander, at will, by ourselves.  I kept my own pace, and felt out of breath, for sure, but no longer captured by the doubts and self-judgment from before.  After a lot of time meandering among the beauty all around us, I came around a corner and saw Rolando and the others looking up, into the trees. Another Quetzal? I wondered.  Then Rolando said something that like “Ocelot” to me and I got REALLY excited. To see a big cat , un-captured, in the wild would be BEYOND adventure, to me.

However, I was incorrect. There are Jaguars in Panama and those were the creatures I was most longing to see. Hence my mental leap, to “Ocelot” when given half a chance. However, what Rolando really was saying was …..

… Sloth.  There was a sloth, hanging free, in the trees. With my lack of practice, I, again, was slower than the others in spotting it. But I did.  And Rolando kindly took my camera, and captured it for me:

Thanks, Rolando, for your photographic skill. And thanks to the sloth, for showing me that slowness is also beautiful.

Rolando showed us many other interesting and beautiful things, in the four hours we spent with him, including these sights …

… as well as a delicious fresh strawberry slushie-type thing, which I was too captured by, to stop, for even a moment, to capture on camera.

After Rolando returned us to the hotel, I spent the afternoon wandering the grounds, taking photos. You have already seen, above, the pictures I took of the three parrots. Here are some more photos from yesterday afternoon: 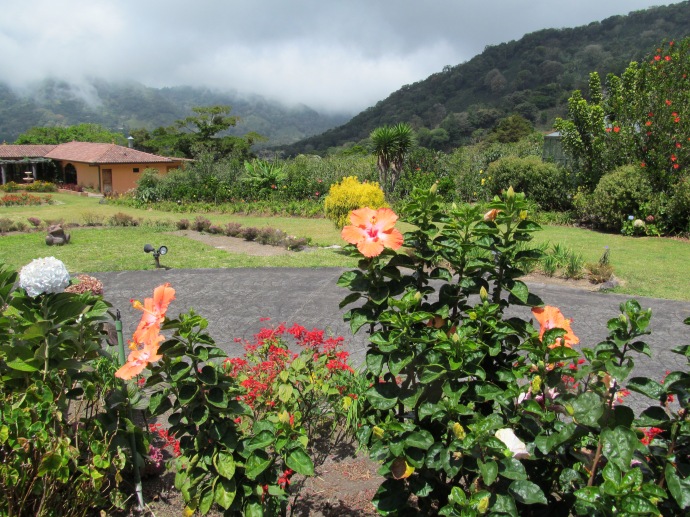 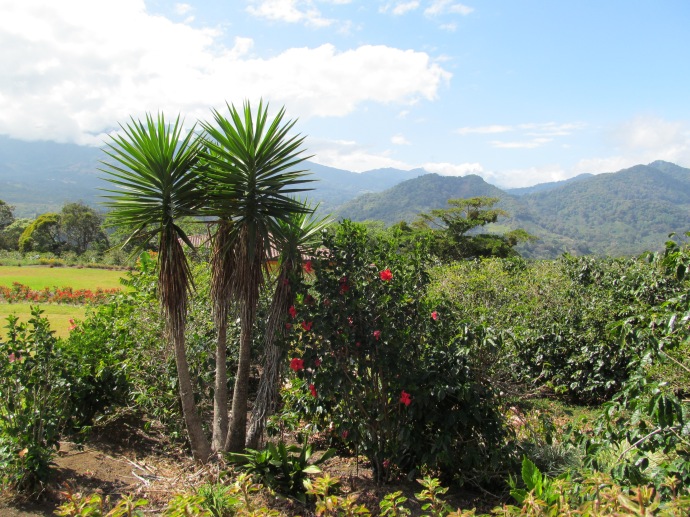 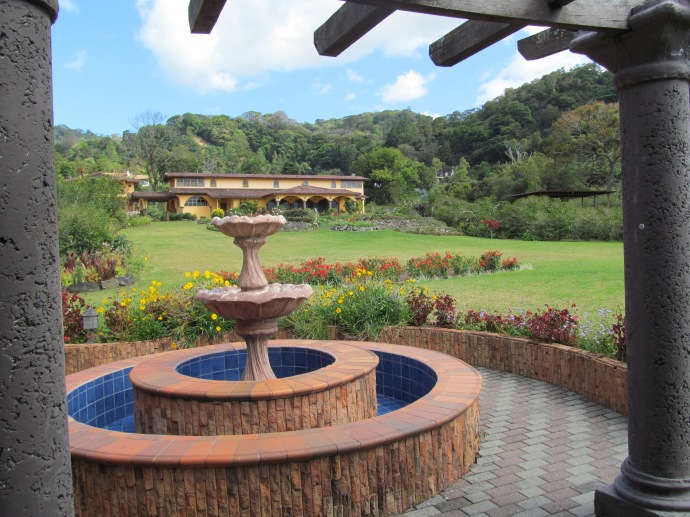 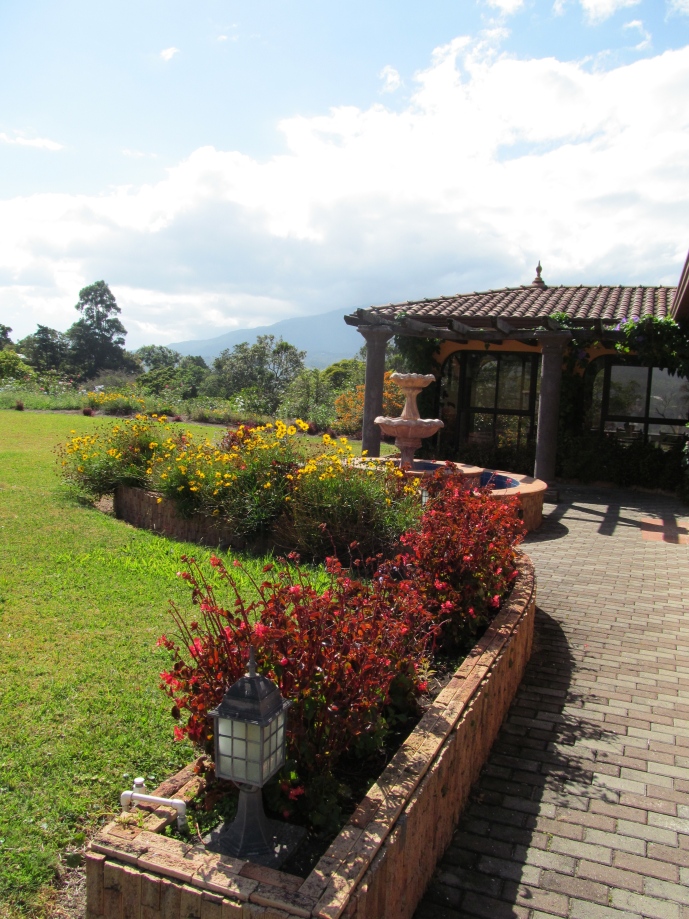 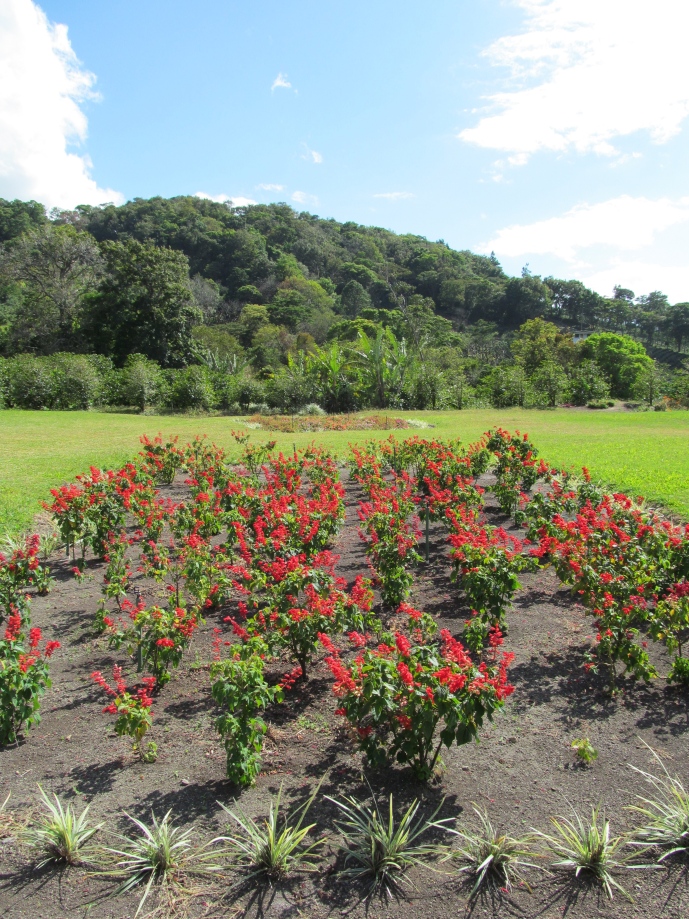 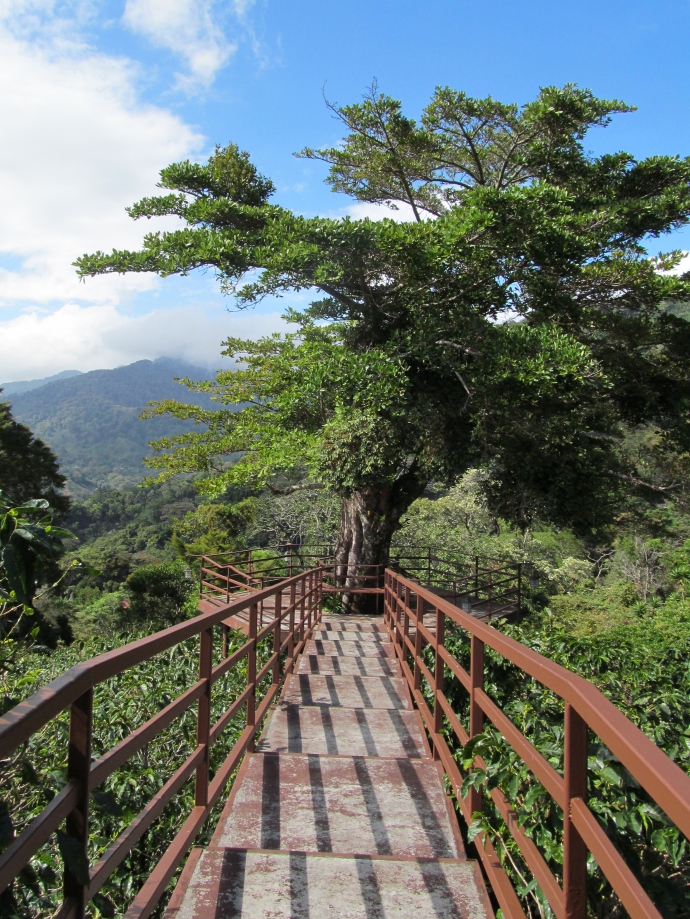 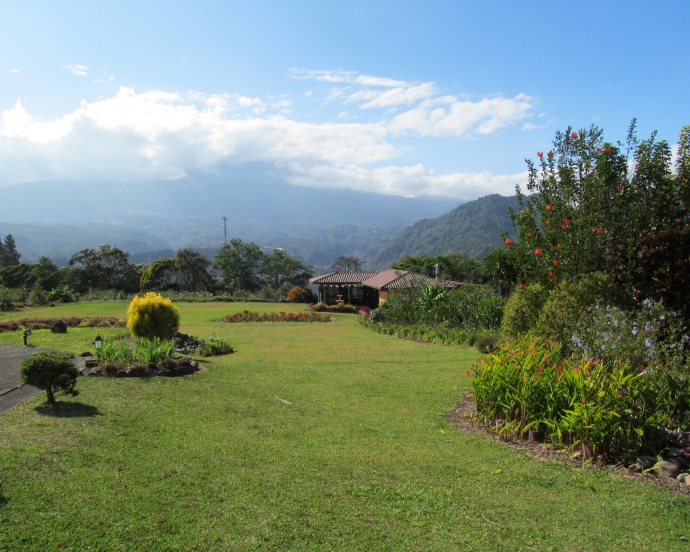 So what feels left unfinished before I publish this post?

As I may have alluded to in my blog posts, one of my favorite animals is the Capybara. If you look at this previous post,  “Day 276: Radical Acceptance,”  you’ll see some evidence of that, people. (The capybara is the creature that — to me, has always looked exactly like a giant guinea pig, sharing the sofa with a regular guinea pig.) 2

Anyway, at one point when Rolando was consulting his magic book of local creatures, I spotted the capybara. I said, “ARE THERE CAPYBARAS AROUND HERE?”  I don’t think I actually yelled, but I was beyond excited. I asked if I could see one, and Rolando said, “Yes … in a zoo?” which I thought was funny, since that’s exactly where I’ve seen them, so far in my life. He did tell me more about the Capybaras, how they were shy and only came out at night (although Rolando has seen Un-captured Capybaras at times, living in the same local environment).

So even though it’s very unlikely that I will see an un-captured Capybara before I return home, in two days, it helps to know they’re out there, very close to me, right now.

My heartfelt thanks to Peggy,  Rolando, Eliaser, Irina,  artists everywhere, all creatures captured AND un-captured, and to you — of course! — for reading today.

1 I really like that title, “Beyond Adventure Tours.”  It reminds me of “To infinity …. and beyond!” from Toy Story. Whatever “beyond adventure” IS … it has to be pretty darn exciting.

2 If that description didn’t make you check out a link to a previous post, I give up.