Last year, I wrote about “The Oxygen Mask Metaphor,” which is way to remind people who focus too much on other people’s needs that their needs are important, too.

I use that metaphor a lot in therapy because … it helps.

Yesterday, I used a new metaphor, which has this advantage over the other one: I made this metaphor up. It’s mine! (Hmmm, at this point, I’m thinking: This post might turn out to be just one big brag.*)

We talked about how people can get stuck in emotional responses. (Something I wrote about, in another way, in yesterday’s post.) And then I came up with the metaphor:

Do you know how when the engine light in your car first comes on, your automatic first response is this: There’s something wrong with my car!  I have to pay attention to this, now!  And then, after you’ve owned cars for a while, you figure out that the engine light probably means nothing serious. And yet, when it lights up, it gets your attention, and it’s hard to ignore.

In case you don’t know what an engine light is — and to grab this opportunity to include an image — here are some examples: 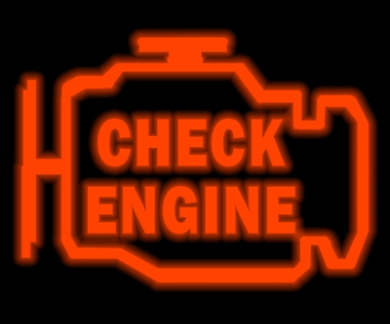 I confess, I came up with that metaphor yesterday because … my engine light has been coming on lately. Yes, the friggin’ engine light comes on periodically, and my mechanic and I talk about it. At this point, we both believe it’s nothing serious.

But whenever that engine light is on, it nags at me. I feel like there’s something wrong.

When I came up with that metaphor yesterday, I brought it up tentatively … because you never know if somebody else’s experience matches your own. I mean, it’s possible this person:

But, lo and behold, the metaphor worked like a charm. She totally got it. And she understood my point (and I did have one):  guilt, if it’s coming on all the time, might be like the engine light — automatically attention-getting and alarming, but something you might want to learn to ignore, when appropriate.

She found that metaphor so useful, she wanted to remember it, so I gave her a prescription for it. (See here, for more about that.) (Boy, this post IS turning into one big brag. *)

So how do I want to end this brag-y post, today?

Just to tell you this: When I got up this morning, I figured I would write about this topic, because — honestly, people — I’m pretty proud of that metaphor.  But I didn’t really feel like writing about that, or much of anything else.

And then I asked myself this question: Do I feel guilty, about anything?

And I noticed that, and turned my attention to other things.

Thanks to those who use and learn from metaphors, people whose engine lights have come on for any reason, and to you — naturally! — for visiting today.

* About what a cool therapist I am.

** An old friend of mine tells this story: When we were in our 20’s, she said to me, “I bite the inside of my mouth all the time.”  I said, “Really?  Are you biting it right now?”  Apparently, my keen methods of therapeutic interrogation haven’t developed all that much.

*** I’m not giving any attributions for these images, because I don’t think anybody is going to have a sense of ownership about them. And if they do, I’ll apologize and make amends, without any you-know-what. ****