One of my favorite concepts from  Narrative Therapy is The Personal Team.  I love asking people questions about their team, like “Who is on your team?” “Is this person really on your team?”  “Who might you add to your team?”

The more conventional term for Personal Team is “support system,” defined by  Merriam-Webster as “a network of people who provide an individual with practical or emotional support.” 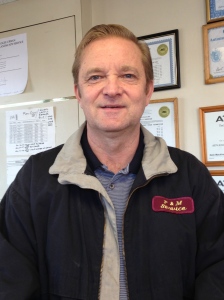 This is Mark Jamieson. I first drove into his establishment — P & M Service Center, in Belmont —  about a year ago, looking for a new mechanic. When I first talked to Mark, my Trust Indicators all came up green.  And all my dealings with Mark and his service station have been consistently positive since.

Yesterday, after he did my yearly automobile inspection, I asked Mark if I could put him in this blog. He then told me some great stories, some of which I’ll include here.

When Mark was 12, he decided he wanted to start a business fixing lawn mowers, because he enjoyed doing mechanical things like that.  He asked his father (whom Mark describes as  “not mechanical at all”) to lend him $2 so he could advertise his lawn-mower repair abilities in the local paper.   And he got responses, really quickly.

Mark’s first customer — whom he remembers vividly —  asked Mark how much he would charge to fix his lawn mower. Mark, who hadn’t thought about money at all, took a wild guess and said, “50 cents?”  The customer replied, “No!  You have to charge more! You have to charge what your services are worth!” That customer suggested that Mark  charge $2, so he was able to pay his father back the loan immediately.

As Mark told me stories about his work history, what kept coming through were lots of qualities I admire, including his continuing interest and pride in his work,  as well as an adherence to personal and professional values.

For example, Mark told me that he can tell, very quickly, when he meets a new customer, whether this is going to be a good match.  In Mark’s words, “everybody has to be comfortable.”  And if there isn’t that mutual comfort and satisfaction with the business relationship,  Mark says, “I don’t need everybody’s business.”  If it doesn’t work out, it doesn’t work out. (I told Mark I could relate to what he was saying.)

Before I left, Mark wanted to tell me this last story:

When Mark was  19 — his first year owning the service station — a new customer brought in a 1974 Ford Maverick. The Maverick owner told Mark that the car wouldn’t start and that it obviously needed a new starter. When Mark started to explain to this customer his usual plan — to check out the car and diagnose what was wrong with it — the guy got irate and said, “Hey!  I know what it needs!  The starter is broken!  Just do what I’m telling you and put in a new one!”   So Mark and his team put in a new starter, just as this guy had insisted. When this guy returned to pick up his car and tried to start the car, nothing happened.  The guy was very angry.  Mark told him, “Yes. It won’t start. That’s because you wouldn’t let us find out what was wrong with it  and fix it.”

I loved the way Mark told this story; I only hope I captured a flavor of how much fun he had telling me this.

Mark also told me yesterday, “I’m not a big Internet user”, but he knew that there was a website online where people shared opinions about service stations. He said, “We’ve won best service station for this area,”  which he hears about through new customers. And after I first met Mark, last year, I checked out my intuition about him and his service station on the internet and — indeed — the reviews were excellent.

Mark also has people working for him who are all helpful  and a pleasure to deal with. Here’s one of them: 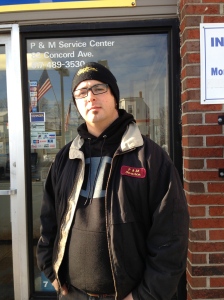 This is Tom. He helped me find my cell phone last week, with a lot of good humor.  (I had actually dropped it outside the service station, on a day when I was pretty sleep-deprived.)

Tom is more of an internet user than Mark, and he told me he’d be able to find this blog, easy.  Mark asked me to e-mail him the link so he could check it out. Actually, I’m going to drop by tomorrow, on my way to work, and show this post to Mark, to make sure I got the stories right. (I really value people’s stories and want to make sure I tell them correctly.)

Thanks for reading these stories today. And, dear reader,  I hope you have a good mechanic — and other good players — on your team.