When I was in South Carolina a week ago, I had a lot of fun connecting with interesting people whose kindness and helpfulness I truly appreciated, and I put some of those people in my blog posts.   (See  here and here for two posts that had a lot of that goin’ on.)

Now, I’m glad to be back in Boston, but I’ve been kind of grumpy about the weather since my return.  This might be The Year of Living Non-Judgmentally, but it’s really difficult for me to be non-judgmental about the winter weather in New England.  I’ve lived here all my life, and I just might be approaching done-ness about  the winters here, due to:

Hmmmmm. I actually thought this was going to be a joyful, accepting post about being back in Boston, but I guess I’ve got some pent-up resentment going on here.

So let me take a breath, to get back into acceptance of the moment (and the current moment DOES include friggin’ New England weather, after all).

The  topic of today’s blog post is “Local Connections,” because after I got back home, I asked myself this question:

Why not approach  the people where I live with that same eagerness and openness to connect  I had when I was away on vacation?

Because I don’t know about you, but I tend to get locked into a routine when I’m home, and I’m not as likely to engage with new people as I am when I’m on vacation.

And I think there are lots of people around Boston who would be kind and helpful —  just like the people in SC —  if I approached them openly and kindly, too.

So I decided to do a pictorial essay on that today, including some people I’ve met before and others I just met, today.

A pictorial essay by Ann

This is one of several great guys who work at the parking lot where I leave my car every morning, before I take my 20-minute walk to work.   This man  actually inspired me to write this essay, because of an interaction I had with him the day I got back.

After I drove into the lot that day and got out of my car, he gave me my parking ticket. In  a burst of self-confidence (which I’ve been working on this year), I said to him,  “Hi!  Did you notice I was away?” I enjoyed saying that, but  I honestly didn’t think he would have noticed my being away. (I mean, there are LOTS of cars and parkers, and it’s crazy-busy each morning.) But  he immediately replied, with sincerity and enthusiasm, “Yes!  I did!  Where were you?”  which made me feel great. So I asked him if I could put his picture in this blog, which he seemed really happy about. (He looks it, doesn’t he?) Now I’m regretting that I don’t know his name. But I’ll find out his name when I see him again Tuesday morning. (I did ask him when I saw him next, on Wednesday morning, and his name is Jimmy.) 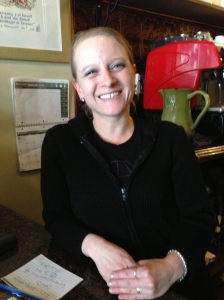 This is Amanda (I remembered to ask her name, thank goodness).  She was incredibly helpful and sunny this morning when I made a stumbling entrance into Cafe Gustazo, a great little Cuban Restaurant in Belmont, right when it opened at 10 AM.  And why was I stumbling?  Because IT WAS SNOWING AGAIN, that’s why. (Breathe!)  I was meeting an old friend I hadn’t seen in years, and Amanda was welcoming and considerate as she helped make me comfortable while I waited for my friend’s arrival. And she was great throughout the yummy brunch we had there. (I forgot to take pictures of the food, so I’m letting go of judgment about THAT.)  (I’ll just have to go back there and get pictures next time. Oh well.)

And,  I’ll tell you something I especially noticed and wanted to celebrate about Amanda. When I asked her if I could take her picture and put her in this blog, she was remarkably enthusiastic that (1) I was writing a blog and (2)  I wanted to put her picture in it.  That was so great to see.

After brunch, I decided to go over to my local Starbucks and take some pictures of two people  who work there, and who are always great whenever we go there on the weekend.  I always look forward to seeing them, and feel genuinely welcomed by both of them. However, when I got there, neither of them was there.

One is a guy we’ve been seeing there for a long time, every weekend, who makes the most delicious, kick-ass chai tea latte’s, evah. So I was concerned, and I talked to Matt about that — who was perfectly friendly and helpful, even though we had never met before: 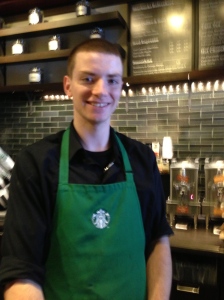 I told Matt  I was looking for the guy who worked at that Starbucks every weekend, was really friendly, made great latte’s, and whose name (I thought) was Steve. Matt said, “Oh, yes!  He’s great. But he doesn’t work here any more. And a lot of the customers have been asking about him.”  And Matt listened sympathetically when I talked about my disappointment that my Favorite Latte Guy was gone, and he maintained a great connection with me while still serving the other people who came in to Starbucks.  And Irina, whom I had also never met before, helped me choose a different kind of latte today. (I wanted a tea without caffeine, so I could — perhaps — take a nap later today.)

Then — and here comes the dramatic section of today’s post — after I was coming to terms with never seeing my Favorite Latte Guy again, he walked in. And it turned out that his name is Mark. (Did I mention that I’m terrible with names?)  And soon after he walked in, the other person from Starbucks I had wanted to feature in today’s blog, a  fabulous woman named Carol, walked in, too. So — duh! — I was just at Starbucks earlier than I usually am. And I got to tell Mark and Carol how I wanted to put them in the today’s Blog of Appreciation.  And they both seemed pretty pleased about that, too. 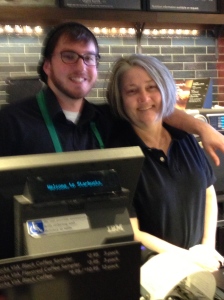 So, now that I’m back in Boston,  I get to be around Mark, Carol, Matt, Irina, Amanda, and the sweet guy from the parking lot.  And, if I keep staying open to connection, I’m sure I’ll meet more people whose pictures I’ll want to share with you here.

Even though I’ll have to negotiate THIS to get anywhere:

Yeah.  Well, I guess it can be kind of difficult, getting around here during the winter. But there ARE people around to help you get where you’re going.