This post may also be one of the more ambitious ones I’ve written so far, in this Year of Living Non-Judgmentally. I’m guessing that I’ll be writing (and re-writing) THIS post throughout the 24-hour period of Day 41.

(Loyal readers of this blog  — and people who know about Cognitive Behavioral Therapy, or CBT — may notice that I just used the cognitive distortion of fortune telling in that previous paragraph, because how can I really know — for sure — how I’ll write this post?)

(By the way, I’m realizing that it would probably be helpful for me to post a list of definitions of Cognitive Distortions, as a handy-dandy reference.)  (I figured out how to do that — YAY!! and  it’s HERE.)

So where was I before all those parentheses?

Oh, yes.  I think it’s safe for me to say that I’ll be writing this post throughout the day because — as  you can tell by the title — this post has A LOT going on. I mean, look at all the sub-topics in that title!  There’s:

Plus, something happened at the circus, that inspired this whole blog post.

So there you go.  I’ve got a lot to cover in this blog post.  Let’s see how I pull it all off.

Since I like the healing power of story-telling (see here for a post about Narrative Therapy), I guess I’ll try the form of a chronological (sometimes  illustrated) story.

(I was about to write something like “I’m not very good at chronological story-telling” but that’s a judgmental, cognitive distortion (labeling, perhaps?) so I’m letting go of those thoughts, so I can do a better job of writing this.)

Where was I before the italicized parentheses with the cool link to the List of Cognitive Distortions?

How I Spent (A Day of) My Winter Vacation

On Saturday, 2/9/13, I was staying with my old friend and co-worker Jenn — whom I love — and her family in Columbia, South Carolina.

I was staying with her on that date because I had been stranded by the Big Boston Blizzard of 2013 (dubbed “Nemo” by the media).

A few weeks before, when I was arranging my birthday trip to Charleston, South Carolina,  I had let Jenn know I was coming to her state, to see whether we could get together, for the first time in over 5 years.  We had decided to meet for dinner on Thursday night, 2/7/13,  the last night of my scheduled stay. Also, Jenn had graciously invited me to spend that last night with her and her family in Columbia. So the plan was for me spend that last night at Jenn’s, and then drive back the next day to the Charleston airport, for my scheduled trip back to Boston.

However, even before Jenn and I met for dinner on 2/7, my return flight home had been cancelled, because of the Dread Blizzard Nemo.

My niece and travel agent, Laura, had told me that I might be stranded until Tuesday or Wednesday! Jenn was gracious enough to tell me that I could stay as long as I needed to.

So, on Saturday,  Jenn and her family (her five-year old daughter, Abby, and her husband Steve) invited me to accompany them to a circus! 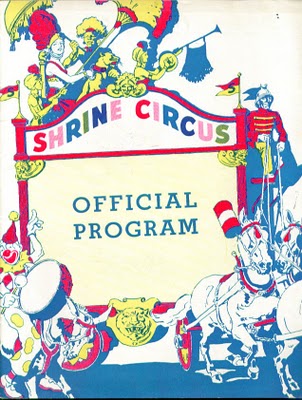 I loved the idea of going to the circus with Jenn and — especially — her daughter Abby, who was extremely excited about going to a circus for the first time! Here’s a picture of Jenn and Abby at the circus.

Here is a fuzzy picture of Jenn’s husband Steve with a fuzzy clown:

There was a family of jugglers at the circus,

and a family of trick cyclists (here’s the youngest member): 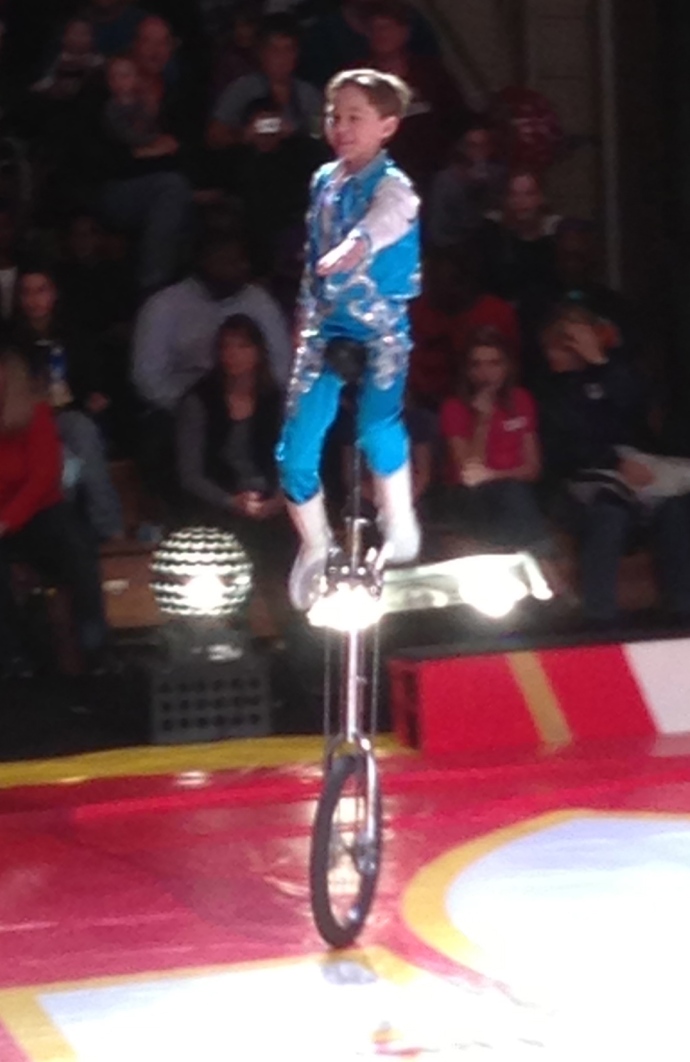 I really enjoyed being at the circus with Jenn and her family (although I didn’t enjoy seeing the tigers, bears, and lions there).  (Seeing the wild animals like that made me sad, which — who knows? — might be the topic of a future blog post.)

Okay. So now I am coming to the more difficult part of the post.  Something happened, after the circus was over, as Jenn, her family, her two friends  Jessica and Barry, their two kids, and I were leaving.  And I have some shame about what happened and my reaction, but I think it’s important to write about.

As I was walking out, I overheard Jenn and her friend, Jessica, talking behind me. And they were talking about Jews and things associated with Jews. And Jenn and her friend are not Jewish. But I am.  And I guess I had been — unconsciously or not — feeling a little self-conscious about being Jewish and being in unfamiliar territory on my travels.

And you know what?  I haven’t admitted in this blog before that I am Jewish. And admitting that can always feel like a risk to me —  because I don’t know what effect that admission has.

After overhearing Jenn and Jessica,  I suddenly felt alienated and unsafe.  I was aware of my Jewishness and how Jenn and her family aren’t Jewish. And I wondered how important my Jewish-ness was to Jenn (and to everybody else).  And  I “rewrote” the story of my friendship and safety with Jenn, to a story where she saw me as her Jewish Friend, rather than her friend, Ann, who is Jewish but is a lot of other things, too.

I’m not saying that this re-telling of the story was accurate.  It involved a major cognitive distortion — mind reading. But once that fear was activated, it stuck.

And then, my own internalized anti-Semitism kicked in; and I was very aware of the stereotypes of Jews, as being  cheap and rich. And I wondered if Jenn and her family thought I was cheap — because I was staying with them.

As these thoughts were coming up for me, I felt awful. I felt like I had been kicked in the stomach by my own thoughts and reactions.  The shift from safety to fear — from love and connection to alienation and suspicion — was instantaneous and extreme. And as much as I wanted to let that reaction go, and to return to how I was feeling before I overheard that conversation — safe, happy, and loving being with Jenn and her family — I just couldn’t do it.

I knew that Jenn could tell that something had happened. As her family and I drove to get pizza, she asked me a couple of times if I was okay.  I decided that while I could not shake these feelings immediately, I would ride out the reaction as soon as possible. I focused on interacting with the Adorable Abby.  And I had enough faith in myself and in my relationship with Jenn that I assumed that we would talk about this soon, although I had no idea how that conversation would play out. But in the meantime, as we talked about paying for the pizza, and I waved a $20 bill at Jenn and her husband, I had some more pangs, for fear that I was being seen as a Money-Obsessed Jew.

But within an hour or so, as I consciously worked at talking to myself, bringing myself back up from that vertiginous plunge into alienation and fear, I felt enough trust to be able to respond authentically and tentatively to Jenn’s asking me, “Are you okay? Is something bothering you?”  And I told her enough to start a conversation which we continued — as we could — throughout the rest of the evening (interrupted by our spending quality moments with the Fabulous Abby).

And I was really grateful to have the chance to express to Jenn how that can happen to me — how I can suddenly feel alienated with people I love, fear the possibility of disconnection, and how those reasons can relate to the confusing issue of anti-Semitism in society.

And that felt new, to admit that to somebody.

In her turn, Jenn told me about her own experiences with fears of hurting and being hurt by people she loves, and how she has detached from people at times, for her own reasons of safety and self-protection.  It was a wonderful conversation of which I could write more (and maybe I will in a future blog post).

But for now, it’s time to put this  post to bed. Because I did, after all, include all the topics from the title!

I have to tell you, dear reader, it was a great day — and not just because of the circus.